National vodka repository Peggy Noonan has just noticed that everyone who is anyone is doing "thoughtful year-end pieces on President Obama" these days so she mixed herself up a pitcher of  breakfast martinis, thanked Reagan's loafers for a wonderful time last night, left them cab fare and bid them 'parting is such sweet sorrow'  for the morn, and then sat down and wrote something very Peggy Noonan-ish, which is to say; Grey Bull Goose loony.

It seems that the crazy sign language guy South Africa employed to make jerk-off motions and The Sign of The Shocker at Nelson Mandela's funeral is just another example of  how lackadaisical and shiftless the Obama White House is because that guy was black and everyone knows that all black people know all other black people (which is why they say "'Sup?" to each other on the street whereas the best you can expect is to be knockout-gamed in the face) so they should have known he was bad juju.

Take it away, Margaret 'Peggy' Noonan:

I would add that in recent weeks I have begun to worry about the basic competency of the administration, its ability to perform the most fundamental duties of executive management. One reason I worry is that I frequently speak with people who interact with the White House, and when I say, “That place just doesn’t seem to work,” they don’t defend it, they offer off-the-record examples of how poorly the government is run.

My worries came home with a certain freshness after the Mandela memorial, where the United States Secret Service allowed the president of the United States to stand for 19 minutes next to the famous sign-language interpreter who, it was quickly revealed, was not only a fraud but a schizophrenic con man who is now said to have been involved in two deaths. In fairness, the event was in another country and the Secret Service wasn’t strictly in charge. That said, it still looks like very basic negligence, as if no one is keeping enough of an eye on the Secret Service, no one’s checking the quality of the advance or sending emails asking: “Hey, what do we know about the sign language guy—any chance he’s a mentally ill criminal?”

I often ask this specific question about sign language people because talking with your hands is, like, crazy talk .... unless you're Italian.

It all looks so lax, so loosey-goosey.

Dusts the rim of a highball glass with Metamucil, half-fills it with Grey Goose and continues:

And it’s all going to continue. One reason this scandal isn’t Katrina is that Katrina had a beginning and an end. The storm came, the storm left, the cleanup commenced and failed and then continued and succeeded. At some point it was over. ObamaCare will never be over. It’s going to poison the rest of the administration. It’s the story that won’t go away because it will continue to produce disorder. Wait, for instance, until small businesses realize it will be cheaper to throw their people off their coverage and take the fines than it will be to reinsure them under the new regime.

We're ALL GONNA DIE! Or at least a small percentage of us will.

But this incompetency goes much deeper than just the Obama administration forcing businesses to hate-uninsure their employees. It puts our very future at risk as described in one of those Peggy Noonan delirium tremen incidents where she fantasizes about how the world will spin out of control just like the room does everyday at about 2PM before she passes out only to wake in a pool of her own sick but still just in time for cocktail hour .

Because now even the Joint Chiefs of Staff have put the 420 in "Joint" and they're just chillaxing on the couch and staying up late playing Assassin's Creed VI: Droning The Shit Out Of Yemen on Xbox until one day they're all, "Dude, where's my nuclear codes?"

I’m worried, finally, that lines of traditionally assumed competence are being dropped. The past few weeks I can’t shake from my head this picture: The man with the football—the military aide who carries the U.S. nuclear codes, and who travels with the president—is carrying the wrong code. He’s carrying last month’s code, or the one from December 2012. And there’s a crisis—a series of dots on a radar screen traveling toward the continental U.S.—and the president is alerted. He’s in the holding room at a fundraiser out west. The man with the football is called in and he fumbles around in his briefcase and gets the code but wait, the date on the code is wrong. He scrambles, remembers there’s a file on his phone, but the phone ran out on the plane and he thought he could recharge in the holding room but there’s no electrical outlet. All eyes turn to him. “Wait—wait. No—uh—I don’t think that’s the code we use to launch against incoming from North Korea, I think that one takes out Paris!”

I have to say, I’ve never worried about this with any previous administration, ever.

Things used to be much simpler in the rotary phone days.

So how did we arrive at this sad state of affairs when the people in the White House are just a bunch of clock-punching speechifying morons who don't actually do any work other than shot-blocking photographers? It's all because of a stupid teevee show:

[Use your George Taylor voice]: Damn you Aaron Sorkin! You blew it up! Ah, damn you! God damn you all to hell!

Also, you too lady: 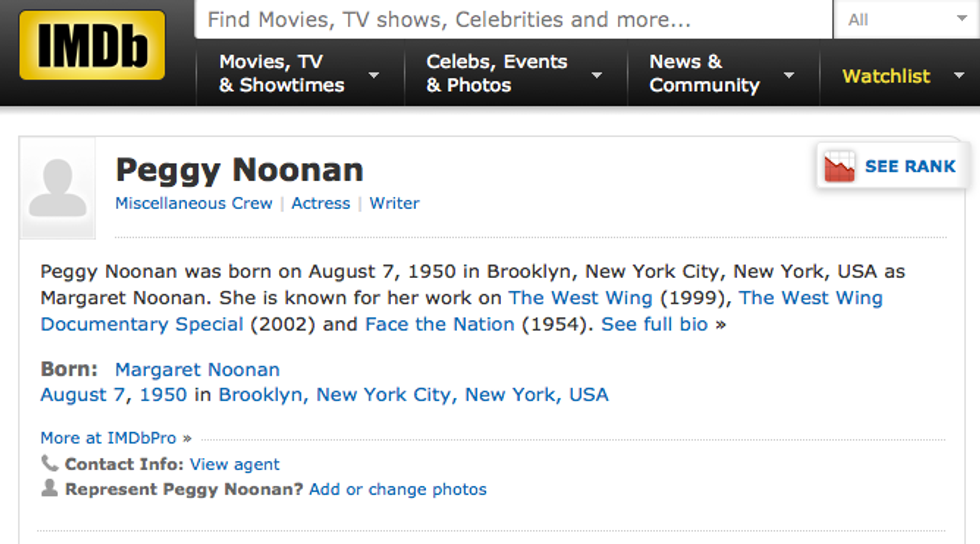 Hey, it was a paycheck, and America's loss is BevMo!'s gain...