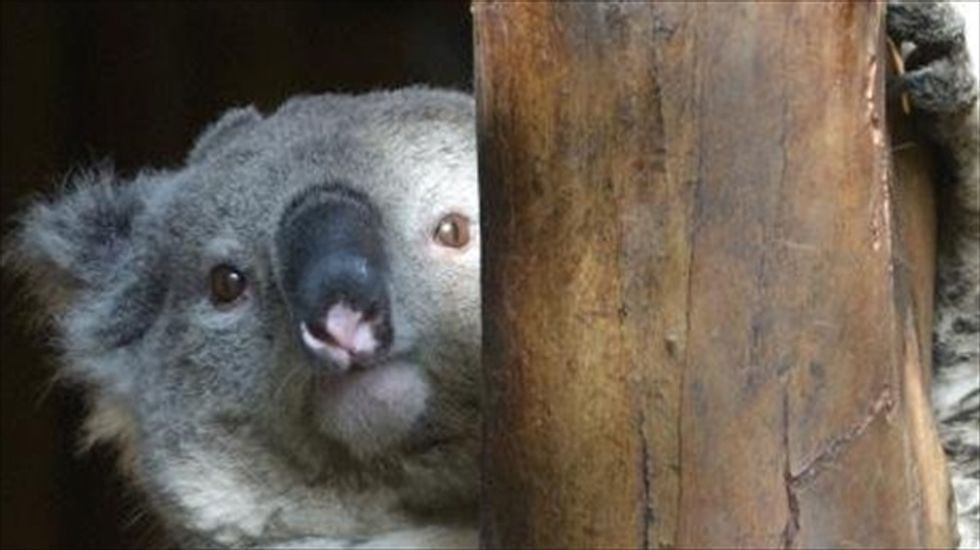 Male koalas may be small, but to woo the ladies they make a low-pitched grunt as deep as an elephant's call, thanks to an extra set of vocal cords, researchers said Monday.

This previously unknown organ lies outside the voice box, or larynx, and is not known to exist in any other land mammal, said the study in the journal Current Biology.

Koalas seeking to mate make noises that sound like a mix between snoring and belching, something akin to a donkey's braying, explained lead researcher Benjamin Charlton of the University of Sussex.

"They are actually quite loud," he said.

The koala makes a bellowing call 20 times deeper than would be expected for an animal that weighs just eight kilograms (17 pounds) on average, the study said.

But since these vocal cords lie where the oral and nasal cavities connect, they are not limited by the size constraints of the voice box, which typically makes for higher-pitched calls among smaller creatures.

These extra vocal cords are like two lips inside the soft palate, a location researchers described as "highly unusual."

After locating them, scientists performed an experiment using three koala cadavers "by sucking air through the pharynx and the larynx via the trachea, mimicking inhalation of air using the lungs," the study said.

A tiny camera was also inserted in the trachea to film the movement of the vocal cords during this time, and sound recordings captured the noises, confirming the organ's role in making the deep sounds.

Researchers said more study is needed to find out if female koalas have these vocal cords as well. Females are sometimes known to bellow deeply, though not as often as males.

Scientists are also taking a closer look at other mammals to see if this extra set of vocal cords is truly unique to koalas or if other creatures may be similarly equipped.

Koalas live in eastern Australia and spend most of their lives clinging to eucalyptus trees and eating their leaves.

While not endangered, experts say the fuzzy gray marsupials are on the decline due to human settlements and loss of habitat.

The study was co-authored by researchers at the Leibniz Institute of Zoo and Wildlife Research in Berlin, the Moggill Koala Hospital in Queensland and the University of Vienna.