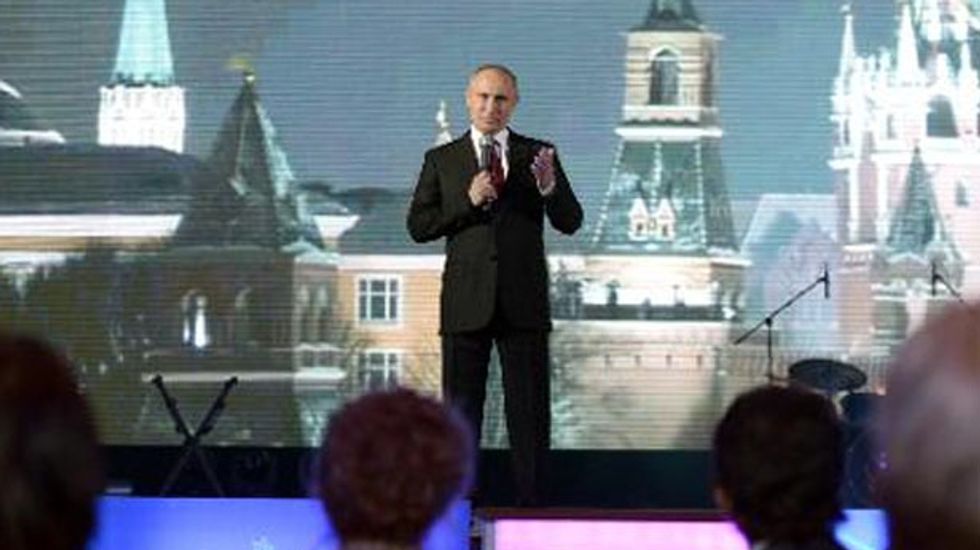 Russians on Tuesday heard two different versions of President Vladimir Putin's New Year's address after a "technical glitch" meant some inhabitants of the Far East watched a pre-recorded broadcast that made no mention of the Volgograd suicide attacks.

The Far Eastern Kamchatka, Chukotka and Magadan regions, which are eight hours ahead of Moscow, were shown a version that showed Putin speaking from within the Kremlin walls in Moscow.

But audiences one time zone to the west were then shown an entirely different midnight address where Putin spoke from the city of Khabarovsk and vowed to destroy the militants who carried out the Volgograd bombings that killed 34.

This is the version that is now being shown as midnight strikes across Russia, culminating at midnight in Moscow (2000 GMT).

Putin's spokesman Dmitry Peskov admitted to Echo Moscow radio that there had been a rare malfunction in the Kremlin's usually well-oiled PR machine.

"It was a technical glitch," Peskov said, explaining the first version had been recorded before Putin had decided to visit Khabarovsk and record a new address.

He said that officials had simply failed to get the new version out to Russia's furthest flung regions in time for when the clock struck midnight there.

The old version "was recorded but then he went to Khabarovsk" he said, adding that the new version was "not completely spontaneous, it was prepared but not much in advance."

Putin said in the address that he was not speaking from the Kremlin -- as is traditional -- but from Khabarovsk as he wanted to show his solidarity with locals who suffered from devastating floods this summer.

The Russian leader's annual address to the nation from the Kremlin at midnight on New Year is as much of a tradition in the country as the Christmas Day speech of Queen Elizabeth II in Britain.

On December 31, 1999 the late Boris Yeltsin announced he was stepping down and handing over the presidency to Putin, who then dramatically delivered the New Year's address as acting head of state.