Scenes from Ukraine you aren't seeing on American TV 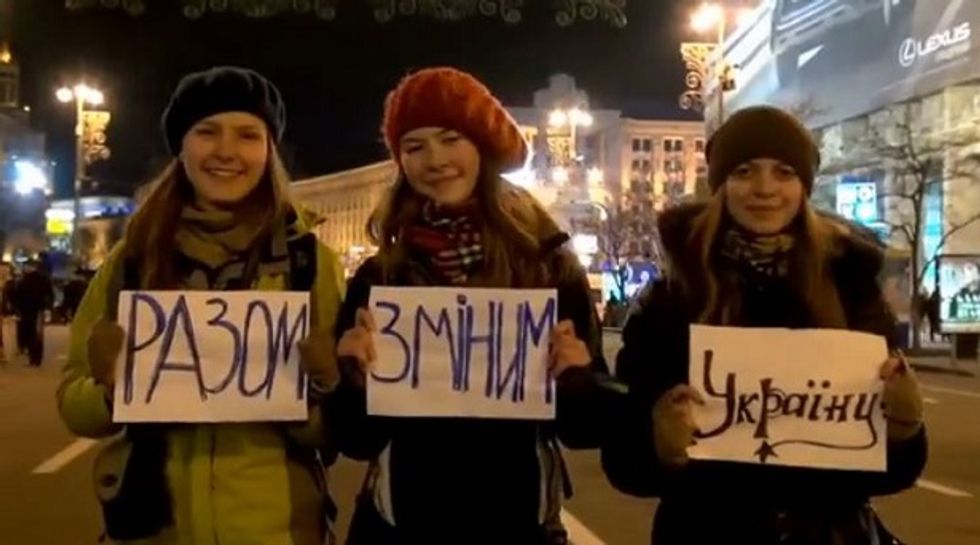 He was in Europe for a showing of his new documentary, A Whisper to a Roar, which portrays democracy movements in Egypt, Malaysia, Ukraine, Venezuela, and Zimbabwe. But then, well, let's let Ben explain what happened in an e-mail he sent to friends...

"I came over from Warsaw, where our film is headlining a film festival, to visit my friend Andriy Shevchenko -- the member of Parliament we featured in the film. I arrived in this capital city to find a full-fledged (so far peaceful) revolution taking place within three blocks of my hotel."

Moses explained that Ukrainian president Viktor Yanukovych had backed out of an agreement to sign an economic agreement with the European Union, a step on the way of becoming a full-fledged member of the EU. Yanukovych's move was seen as caving to pressure from Russian president Vladimir Putin. Sick of Russian influence, the country's populace is shocked and outraged, and in Kiev the streets filled with protest.

"And of course Andriy is one of the central characters in it, so as soon as I check into the hotel it's, 'Come on, Ben, let's go!' And now, my little camera rolling, I'm following him and his friends around in Independence Square and behind the scenes as they try to take down a government.

Moses captured scenes from the protest, and then put together a very brief film to give his friends a sense of what things are like over there. One of his recipients then passed it along to us.

Ben Moses is a longtime, successful producer in film and television. He got to know Adrian Cronauer in Vietnam and then helped bring Cronaeur's story to the screen in Good Morning, Vietnam. He also worked for 60 Minutes, and was part of production teams that aired the Academy Awards, the Emmys, and the Grammys.

See his short film from Kiev below...