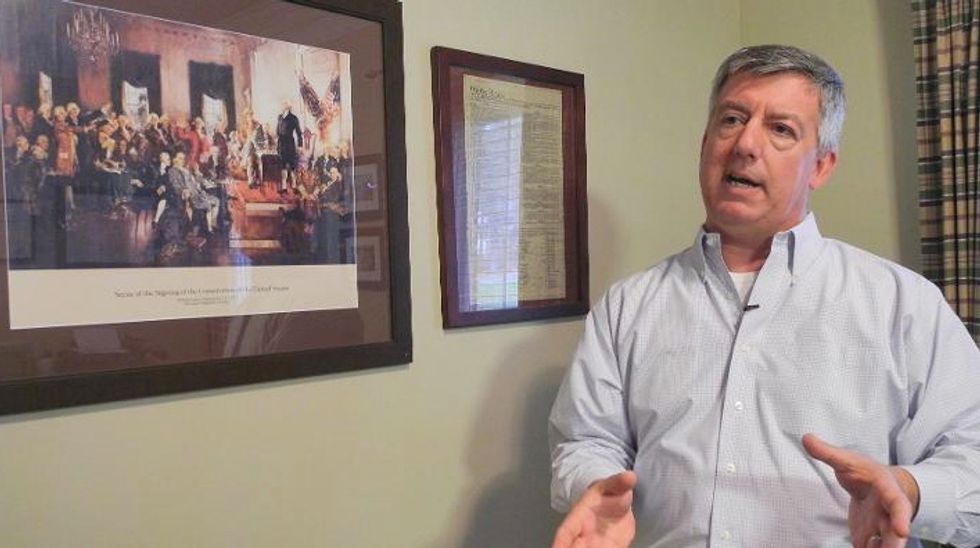 By day, Scott Strzelcyzk is an IT consultant in this rural Appalachian corner of the US state of Maryland. By night, he's something of a modern-day American revolutionary.

"It's time for a 51st state!" declared Strzelcyzk at a town hall meeting in Cumberland, rallying support for an "amiable divorce" from the coastal state's more urban eastern half.

The United States hasn't added a state since 1959 when Alaska and Hawaii became the 49th and 50th states, but Strzelcyzk is optimistic that western Maryland -- five counties -- could strike off on its own in as little as three to five years.

The area is not alone. In other states like California, Colorado or Michigan, regions are itching for statehood, often for the main reason Strzelcyzk cites -- frustration with government.

"I think of myself as an average citizen who is sick and tired of being sick and tired," said Strzelcyzk, who refers to the state capital Annapolis with the same contempt that euroskeptics reserve for Brussels.

"In Maryland, we have a number of irreconcilable differences with the state government and how they govern," he said.

The laundry list of grievances that underpins the Liberate Western Maryland movement runs from higher taxes on alcohol and cigarettes to "oppressive" gun control legislation, in-state college tuition for illegal immigrants, and even stricter rules on septic tanks.

Several hundred people had signed a petition backing the statehood movement by the time Strzelcyzk and a handful of supporters presented their vision to about 80 people who attended the rally at Allegany College in Cumberland.

Its credo is "one smaller, leaner government, more freedom, more personal responsibilities" for the 650,000 predominantly white, rural and older inhabitants of the Maryland panhandle, where 11 percent of the state's total population lives.

But how would Western Maryland pay its bills? Some members of the audience wanted to know.

Others asked why grievances could not simply be tackled at the ballot box, eliminating the need for separation from the rest of the state.

"They have a rigged game, with rigged rules, on a rigged field and they own the referees," he said. "Even through the normal electoral process, the outcome cannot be changed."

Once a Democrat, and later a Republican, Strzelcyzk pitches his proposal at meetings of the conservative Tea Party movement.

Maryland is largely a Democratic state, with liberals living in prosperous suburbs just outside Washington and African-Americans making up the majority of its biggest city Baltimore.

Frank Shafroth, director of the Center for State and Local Government Leadership at George Mason University in Virginia, said that state secessionist movements are signs of frustration in an aging population.

"Those rural areas are seeing fewer and fewer young people," he told AFP.

Breakaway regions are nothing new in US history -- Delaware separated from Pennsylvania, Kentucky was carved out of Virginia and Maine was once part of Massachusetts -- but those examples date to the 1700s and 1800s.

In recent years, in the Rocky Mountain state of Colorado, 11 counties attempted to break away from the main city Denver, although the proposal was defeated in a referendum.

In northern California, the idea of a Jefferson state -- taking in a southern chunk of Oregon -- dates back to the 19th century, and is making a comeback.

Secession, however, is more easily argued than done.

"The obstacles would be hard to overcome," Shafroth said.

Secession by a county would require approval from the legislature of the state concerned, "an unlikely outcome particularly given that those areas that want to secede represent a declining population, so they have very little power within the state legislatures."

Even if that hurdle was cleared, secession would still have to be approved by the US Congress, Shafroth added.

Back at the town hall meeting in Cumberland, Todd Arbogast, a 42-year-old analyst, said secession was still worth pursuing.

"Annapolis ignores us," he said.

Brandon Juhcish, 30, described his feelings as "a little bit skeptical," while Josh Frick, 42, a gun shop employee, leaned in favor of the idea.

"Most of these counties are more rural," Frick said.

On primary day, any one of the three GOP hopefuls -- TV celebrity Dr. Mehmet Oz, businessman Dave McCormick and conservative gadfly Kathy Barnette could win -- although Oz and Barnette are making some Republicans cringe that they will make the cut to the November ballot and hand over a Republican seat to the Democrats.