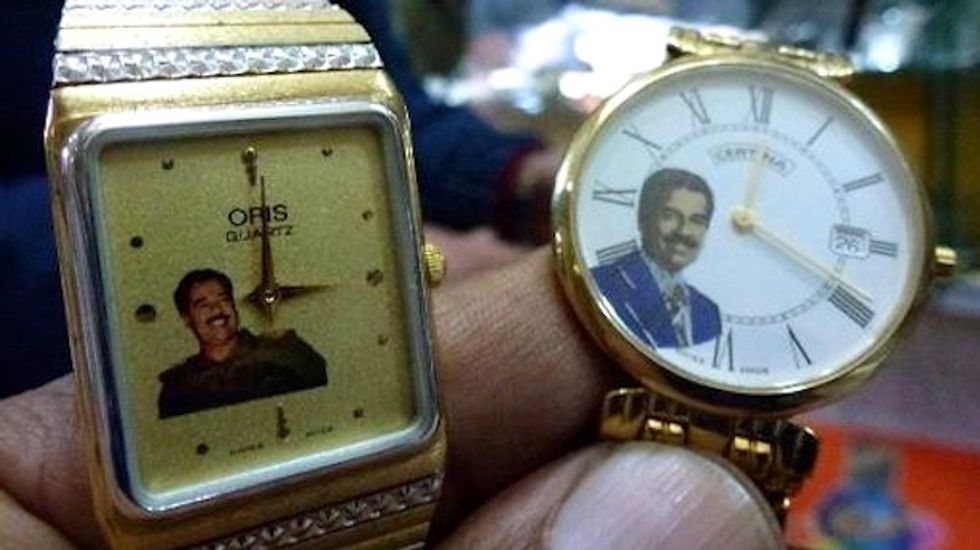 In a predominantly Shiite town near Baghdad, Saddam Hussein roams the streets unmolested, joking with checkpoint guards and shaking the hands of passers-by, proudly announcing his name.

"You didn't execute me," he often tells policemen, laughing. "That was one of my body doubles!"

But the man, clad in a long black robe and leather jacket, is not the Saddam known the world over. He is one of many nationwide cursed as the namesakes of a brutal dictator who ruled the country with an iron fist for nearly a quarter century.

From Saddam's hometown of Tikrit in the north to the western desert province of Anbar, down through the southern provinces, Sunnis and Shiites carry a name once given in tribute, but which has since become an albatross.

"Saddam oppressed so many people, so those who were oppressed by him had strong feelings against him," said Saddam Hussein Ulaiwi, a 35-year-old generator operator living with his family in the town of Aziziyah, southeast of Baghdad. "So they are always berating me, because of my name."

Named by his grandfather when Saddam was Iraq's vice president and in ascendance, Ulaiwi had few positive feelings about sharing a name with the country's dictator.

He recounted how, in his school years, teachers would hold him to impossibly high standards and dole out stiff punishments when he failed to meet them.

When he joined the army for compulsory military service, upon reporting to the unit to collect his uniform, he announced his name to the duty officer, who responded by physically assaulting him for taking the name of the president.

But while families in his hometown were unquestioning, his father received phone calls from political parties asking him to change his son's name and passers-by would berate him, his name reminding them of painful memories.

Ulaiwi did try to change his name in 2006, but was put off by the time involved in dealing with Iraq's famously labyrinthine bureaucracy and the expense required of someone with modest means, choosing instead to stick with his birth name.

"I regret giving him this name," Ulaiwi's father Hussein said wistfully, sitting with his son in the family's small one-story home. "There were pressures on us before 2003 ... and after 2003, there was more suffering."

"There were those who had hatred towards Saddam, and anything with Saddam's name," he said, noting for example that civil servants often do not deal with his son's requests, citing anger over his name.

'From one extreme to another'

A decade on from his capture, Saddam who was hanged in December 2006, still engenders passionate anger among many Iraqis.

Hundreds of thousands, most of them Shiites and Kurds, died at the hands of his Sunni-led government, and countless others suffered immeasurably as a result of the wars he waged against Iran and Kuwait, the latter of which led to punishing sanctions that crippled Iraq's economy.

And while some Saddam memorabilia can be bought in Baghdad, such as watches and other curios, major markings of his rule in the form of statues and posters have been torn down.

That leaves men bearing his name as among the few reminders of the dictator's rule.

Many Saddams have reported death threats, difficulty gaining access to government services and jobs, and other struggles over and above those faced by ordinary Iraqis.

"After 2003, many things happened to me when I travelled anywhere inside Iraq -- I would conceal my name in order to save my life," said Saddam Hussein al-Mihimidi, an Iraqi journalist living in Ramadi, a city west of Baghdad.

Mihimidi's father was fired from his civil service job -- as a result of his son's name, he was unable to convince his superiors he was not a supporter of Saddam's Baath Party -- and efforts to change his name went nowhere.

The 33-year-old, who was named by the doctor who attended his birth, said life before the invasion for him was relatively problem-free, living in the Sunni province of Anbar.

After US-led forces overthrew the government, he considered obtaining fake identification documents and would avoid leaving his house during the peak of Iraq's post-invasion violence in 2006 and 2007, "when they were killing people based on their name."

He now asks his friends to refer to him only as Abu Abdullah, or father of Abdullah, to mask his identity.

"After 2003, my life changed dramatically -- from one extreme to another," he said.