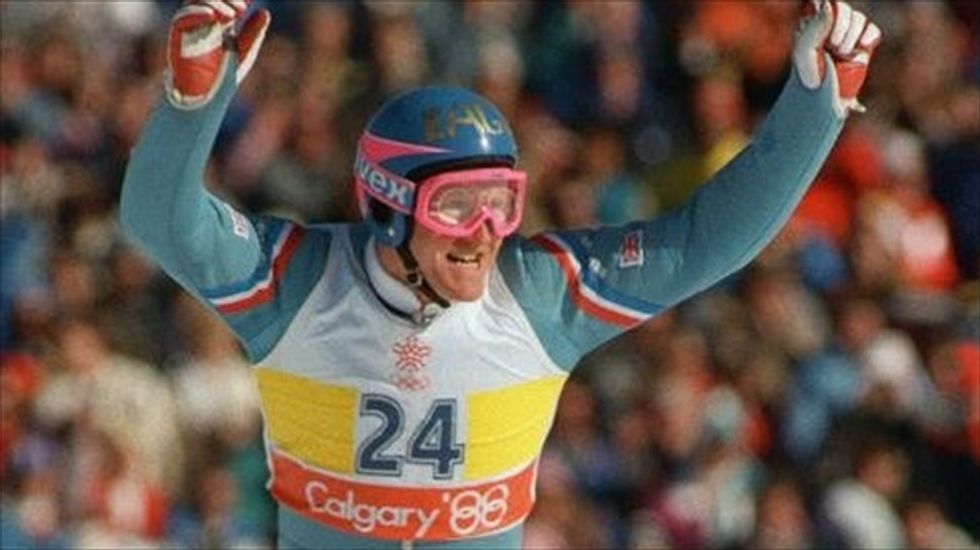 Britain's first ever Olympic ski jumper Eddie Edwards waves to the cheering crowd after completing his first safe jump during the 90m event on Febr. 23, 1988 in Calgary at the XVth Winter Olympic Games [AFP]

Eddie "The Eagle" Edwards, who turned 50 on Thursday, is planning to jump again on New Year's Day in Germany -- 25 years after finishing last at the 1988 Olympics.

Britain's Edwards is planning to jump again at Bavaria's Garmisch-Partenkirchen on January 1, a World Cup large hill event, and is set to come to Germany to train next week.

He came last in the 70m (229ft) and 90m (295ft) ski jumps at the 1988 Calgary Winter Games, but earned plenty of media attention and became an unlikely hero of the Calgary Games.

The married father of two is planning to fly to Germany next week to prepare for the event.

"I'm still fit and in pretty good shape and I wanted to do it before it was too late for me physically," Edwards told the Gloucester Echo newspaper.

"This will be my last chance to have a go and see if I can still do it.

"I've always had that 'have a go' spirit.

"It's not reckless because I think about the risk and every conceivable thing that could go wrong.

"I am nervous but also quite excited."

Edwards has lived a colourful life since Calgary.

He studied for a law degree, and has also worked as a motivational speaker, won a celebrity diving competition on British television and was a torch-bearer at the 2010 Vancouver Winter Olympics.

Now he is hoping to roll back the years having had eye surgery and no longer needs his trademark thick glasses -- which could also be a disadvantage.

"Because I have had eye surgery, I can see where I am going now, so that might cause problems because I might not want to go down the jump."