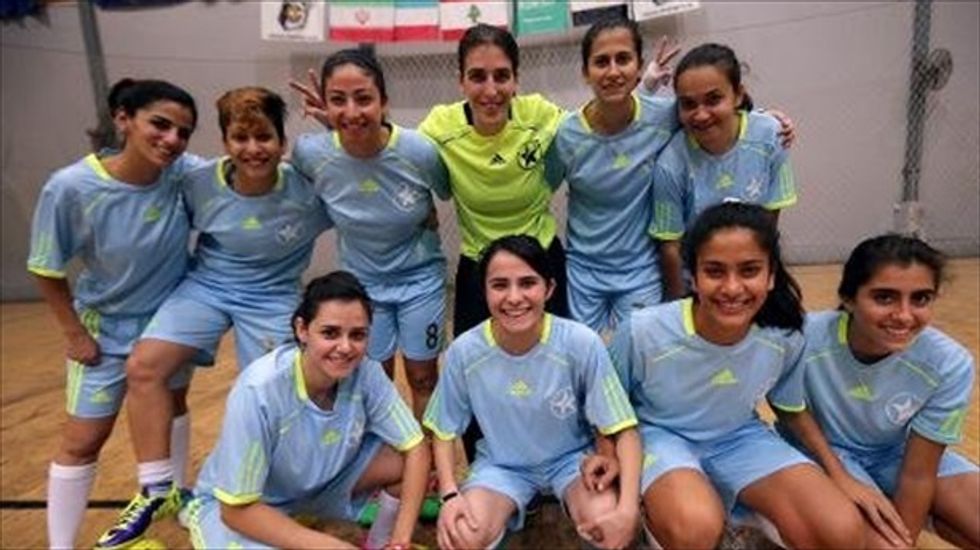 Players of the Stars Academy for Sports futsal team pose for a team photo prior to a training session on Nov. 27, 2013, in Beirut [AFP]

A group of Lebanese women have shrugged off family disapproval and paltry resources to create their country's first female league for futsal -- the faster, five-a-side variety of football.

"My family was against me playing at the start. They'd say neither football nor futsal is a women's sport, but I fought for it, and kept on training," said Aya Chiry, 27.

Today, Chiry is the captain of a Lebanese women's futsal team called the Stars Academy for Sports.

Along with eight other teams, SAS took part in the opening round of Lebanon's first national women's futsal league which kicked off at the weekend.

Chiry, who lives in Beirut, eventually managed to convince her parents "by studying extra-hard and by just keeping at it, showing them that this is what makes me happy".

Without an official five-a-side league, there was little opportunity for either her talent or women's futsal to be recognised.

"I've been playing for five years, and the sport has taken me to Spain, Italy and Jordan for games. But we didn't have a league in Lebanon. I'm really proud we do now," Chiry said.

Like Chiry, many girls on the team have faced a lifetime of discouragement, mostly from family members who felt the game was unsuitable for women.

But today Chiry combines her love for the game with her MBA studies in marketing and her job at a skincare company.

Among the team's new recruits is Aya al-Khatib, a 20-year-old Palestinian from Jericho, who travelled to Lebanon just to play in the opening season.

"Football and futsal have been part of my life since I was 11 years old," said Khatib, who wears her hair short and dyed platinum blond.

For her, sport is about much more than exercise.

"Sport is the only thing that brings us together. People from many countries that have suffered problems in the past have overcome them through sport," said Khatib, who is a midfielder on the team.

"The fact that you have to shake hands with your adversary at the start of every game means you are contributing to peace, and that is what our region needs," she added.

For the Lebanese members of the team too, the game is a chance to forget the sectarian and political barriers that so deeply divide their country.

"Our players come from all over Lebanon and from all the sects, but here we just don't care about that. We are one team," said Rania Chehayeb, a 30-year-old from the mountain town of Aley, whose husband "is very supportive" of her love of the game.

Lebanon has a national women's football team, and neighbouring Jordan and the Palestinian territories both have women's futsal leagues.

"There has been a women's football league in Lebanon for seven years," said SAS coach Wael Gharzeddine, 35.

"Now we get to have a futsal league as well, and that will help give even more exposure in Lebanon to the fact that this is a women's game too."

"It will also give our national (football) team a better chance to star in international competitions, because leagues allow more time for talent identification and training," he added.

"We're in the 21st century. Things have changed now. Women do jobs that were long reserved for men, while men now do things only women used to do."

Speaking on the sidelines of his team's training on the outskirts of Beirut, he said: "Society used to see football and futsal alike as a game for boys, because they're tough, contact sports.

"But now these sports are growing fast (and) more and more girls are joining in."

Team goalkeeper Nathalie Jilinguirian, who is of Armenian origin, was keen for more girls to join the squad.

"Eventually we'll grow up and end up having kids. We won't be able to be so committed," the 27-year-old told AFP while practising shot-stopping dives.

"We want younger girls and boys to join the fun, and I'd be willing to train them myself," said Jilinguirian, who works as a physiotherapist and thanks her father for introducing her to football.

"We want a new generation to take our place," she said, before going back to her drills.