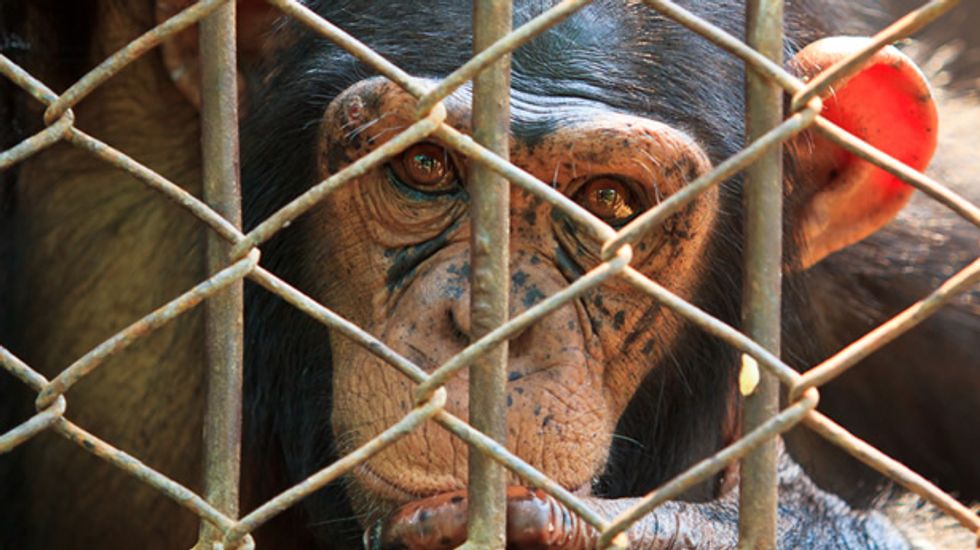 The Nonhuman Rights Project (NRP) filed a writ of habeas corpus in a New York court today on behalf of Tommy, a chimpanzee it claims is being held captive in deplorable conditions.

According to the NRP, Tommy is being held, alone, in a small cage in the back of an unlit shed in a trailer park. Three years ago, the group claims there were between 4 and 6 chimpanzees being held in that facility. Those chimpanzees are presumed to have died in the interim, which means that not only is Tommy's living conditions inhumane -- his only company is a small television on the opposite wall -- but his life is likely in danger.

The NRP believes that the isolation he endures, compounded with the imminent danger to his life, warrants a writ of habeas corpus. A writ allows someone being held in prison -- or someone advocating on his or her behalf -- to have a judge compel a captor to show cause for imprisoning him or her.

Precedent for filing habeas corpus writs on behalf of those deemed to be "nonhuman" does exist. The NRP cites the 1772 case of James Somerset, an American slave who escaped from his owner while in London, but was recaptured and about to set sail for Jamaica in chains when his godparents, with the help of abolitionist lawyers, filed a writ of habeas corpus on his behalf.

The Chief Justice of the Court of the King's Bench heard Somerset's appeal, and in what became a significant triumph for the abolitionist movement, declared Somerset to be a legal person, not a piece of property, and as such was accorded the same rights of all legal persons.

The NRP notes that New York case law permitted slaves to file a writ of habeas corpus under the precedent set by the Somerset case, and that their proposal on behalf of Tommy is no different. It compared the current position on the status of cognizant animals to those of "states in the south, which considered slaves to be simply chattel, not legal persons, simply barred them altogether from using habeas corpus to challenge their enslavement."

The organization also vowed to continue the fight even if this suit is turned down. New York has an automatic appeal of habeas corpus decisions, so it knows its case "will be heard, sooner or later, by New York’s intermediate appellate court, and quite possibly by New York’s highest court, the State Court of Appeals. And, from many points of view, that’s where we would like the case to be heard, since what happens at the appellate level has much wider reach than at the trial level."

["Chimpanzees In Captivity" on Shutterstock]