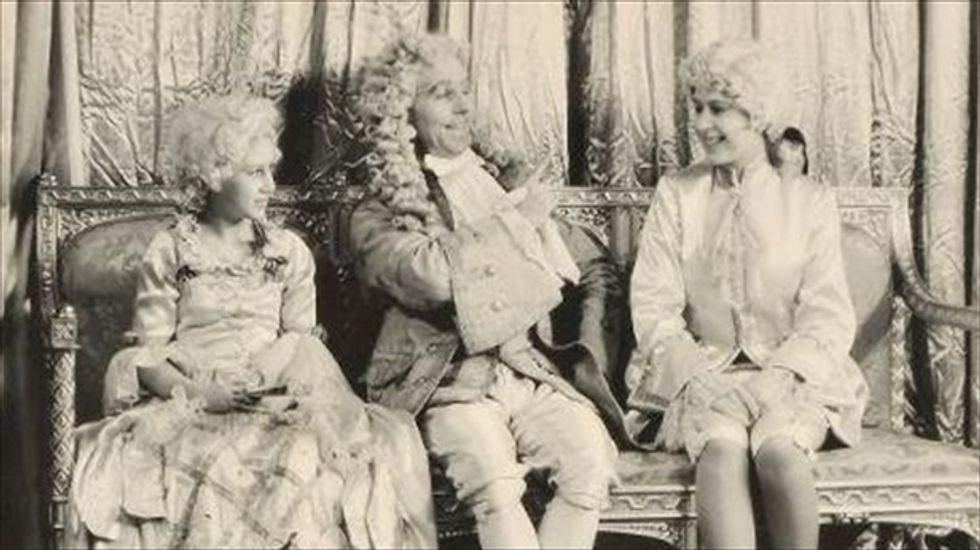 A picture released by Dominic Winter Auctioneers on Dec. 4, 2013 shows a signed photograph of the then Princess Elizabeth (R) and Princess Margaret (L) on the set of the play 'Cinderella in Windsor' in 1941 [AFP]

She's showing far more leg than would be appropriate for a monarch, but Queen Elizabeth II was still a teenage princess when she was photographed in fancy dress during private royal pantomimes in the 1940s.

The pictures of the young royal and her little sister Margaret dressed up in wigs and costumes for performances of Cinderella, Sleeping Beauty and Aladdin have been made public ahead of their auction in Britain on December 11.

"The pantomime albums are highly atmospheric and you can see both princesses growing from childhood to adulthood," said auctioneer Chris Albury.

"But the albums are further dramatically charged when you consider the wartime backdrop to these luxury pantomimes performed at Windsor Castle."

The photographs are thought to have been taken between 1940 and 1944, when Britain was in the throes of World War II, and many of them were signed by the two princesses.

The pantomimes were produced by Hubert Tannar, headmaster of the nearby Royal School and an enthusiastic amateur actor.

One of his star pupils, Cyril Woods, also acted in the shows and struck up a lasting friendship with the queen.

Woods collected the photographs and before his death in 2001 left them to friends, who have now decided to sell.