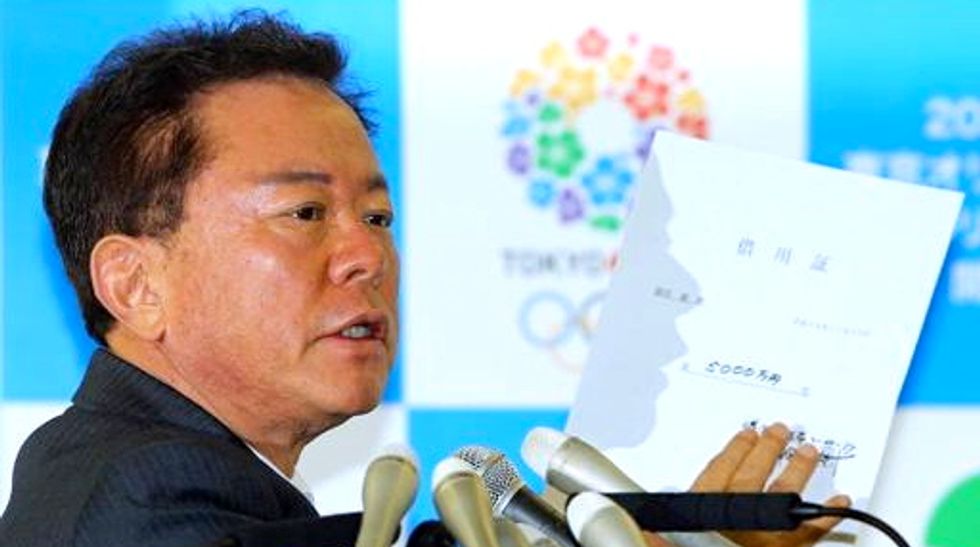 Tokyo's governor, one of the main faces of the mega-city's successful bid to host the 2020 Olympics, resigned Thursday after admitting he was naive for accepting an undeclared $500,000 from a hospital tycoon.

Naoki Inose, who was elected head of one of the world's biggest conurbations a year ago, had faced weeks of intense pressure over suspicions that the money amounted to a bribe in an attempt to influence policy.

"I have decided to resign from the post of Tokyo governor," Inose told a hurriedly arranged press conference.

"I intended to fulfil my duty of explaining to the city assembly, people of Tokyo and people of the nation, but regrettably I could not clear doubts over me."

Inose was a key figure in Tokyo's successful bid for the 2020 Olympics and he said his resignation was partially aimed at avoiding a negative impact on preparations for the Games.

"At this important juncture when Japan needs to... jump-start towards 2020, we can't afford to paralyse the metropolitan government with my problems," he said. "I decided that my stepping down is the only way to break the impasse."

Writer-turned-politician Inose acknowledged in November he had received 50 million yen ($500,000) from the political family behind the huge Tokushukai medical group before last year's gubernatorial election.

The money, handed to him in cash, was kept in a safety deposit box and, said Inose, was a personal loan that had nothing to do with his campaign for the city's top job.

Under Japanese election law, campaign treasurers must report all income such as donations related to electioneering. Those who violate the law can face prison terms of up to three years or fines of up to 500,000 yen.

Inose, who inherited the mantle of Tokyo governor from firebrand nationalist Shintaro Ishihara, has cut an increasingly lonely figure over the past few weeks as the furore around him swelled.

He has been grilled by a hostile assembly on several occasions, with the media picking apart his appearance and stuttering performance, focusing on beads of sweat that dripped down his neck.

At hearings and in press conferences he has waved around a piece of paper he insists amounted to a loan agreement, although observers noted that it bore no date for repayment and showed no terms and conditions.

On another occasion, he produced a bag in which he claimed to have carried the large bundle of cash. Opponents delighted in trying to prove that the sum would not fit inside the holdall.

"I was an amateur politician"

On Thursday the 67-year-old Inose admitted he had been naive about the cut and thrust of politics.

"I didn't know how strict professional politicians need to be," he said. "I was an amateur politician even though I knew well about policies. I myself thought it was extraordinary that I became Tokyo governor," he added.

Pressure grew when Prime Minister Shinzo Abe, whose Liberal Democratic Party supported Inose's run for the job, was reported to be keen on drawing a line under the scandal.

"The fact that (Inose) received a large sum of money from someone who does business related to his authority (to approve hospital openings) is enough to warrant his resignation," Masahiko Komura, deputy head of the LDP, said Wednesday.

The money trail surfaced in September when prosecutors raided the Tokyo headquarters of Tokushukai over claims it had paid staff to campaign for the election ambitions of Takeshi Tokuda, one of the heirs to the family fortune.

A week later Inose's secretary returned the 50 million yen to the family, but by mid-November the transaction had become public knowledge.

At the time, Inose said he was offered the money by the Tokudas and felt "it would be rude to refuse".

However, public broadcaster NHK reported it was Inose himself who reached out to the Tokuda family, and had asked for 100 million yen before the election.

Tokyo's governor is the most senior politician in the metropolis, -- including the city proper -- which is home to around 9 million people, as well as overseeing more rural districts and islands. He has overall charge of an annual budget of more than $60 billion.

Inose is an award-winning non-fiction writer who turned to politics in the early 2000s, becoming a member of a government panel on administrative reforms under then-premier Junichiro Koizumi.

In 2007 he was appointed as deputy to Tokyo's then-governor Ishihara, who last year anointed him as successor before a December vote.

An election to replace Inose is expected next month. Possible candidates being mentioned in the media include Hideo Higashikokubaru, a comedian-turned-politician who resigned as a lower house member this week, and education minister Hakubun Shimomura.