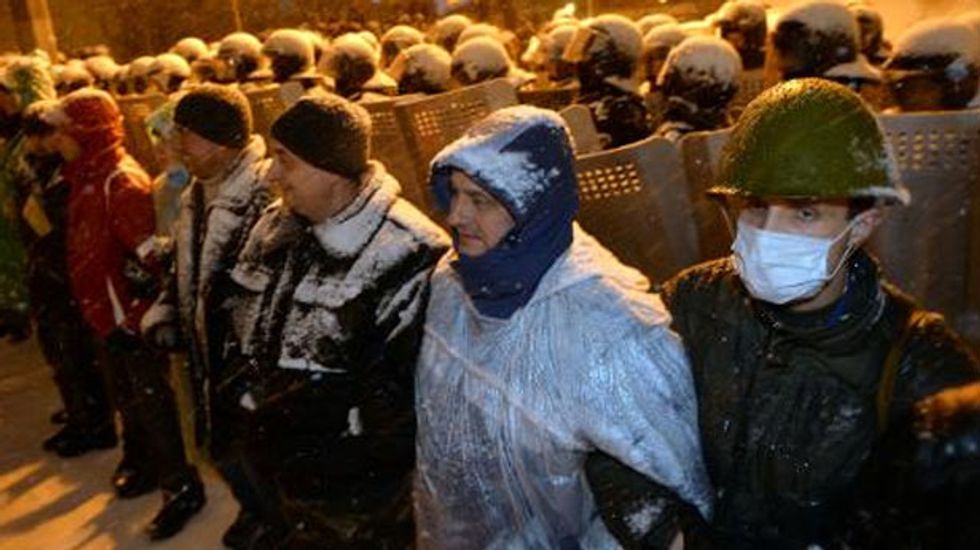 Ukrainian security forces on Monday moved in on pro-EU demonstrators to end a week-long blockade of the government headquarters after the authorities sent special internal troops into central Kiev in an increasingly tense showdown.

With the authorities apparently keen to regain control of the city centre, the party of jailed opposition leader Yulia Tymoshenko said that armed police had raided their offices although this was denied by police.

Upping the stakes after more than a fortnight of protests over the government's rejection of a pact with the European Union, the protesters a day earlier symbolically toppled the statue of the Soviet Union's founder Vladimir Lenin in Kiev.

President Viktor Yanukovych announced he would meet former Ukrainian presidents on Tuesday in a bid to find a way out of the crisis and was also backing the idea of roundtable talks with the opposition.

With international concern growing about the risk of tensions degenerating into violence, EU foreign policy chief Catherine Ashton was to travel to Kiev Tuesday for talks with Yanukovych.

Ukrainian police on Monday forced protesters who have blockaded the government headquarters in central Kiev for a week to move away from the building, an AFP correspondent said.

A column of special troops moved in on the protestors to force them to leave, upon which opposition MPs urged the demonstrators to move down the street to Independence Square, the main protest venue.

Communal service workers -- helped by police -- then started dismantling the barricades the protesters had erected around the cabinet headquarters.

The website of the Zerkalo Nedeli weekly said that Yanukovych on Monday had held a special meeting of his top security officials and ministers at his out-of-town residence where it was decided to restore order in central Kiev.

Dozens of interior ministry troops and anti-riot police had earlier been sent into central Kiev and could be seen moving in columns through the streets.

"We are now going to defend our Maidan," said opposition leader Arseniy Yatsenyuk, referring to Kiev's Independence Square by its Ukrainian name.

"It is impossible now to make a step backwards," said protestor Volodymyr Kiblyk from the central town of Znamenka who has been at the Kiev protests for two weeks.

A presidential statement said Yanukovych backed an initiative for talks proposed by Ukraine's first ex-Soviet president Leonid Kravchuk. He will also meet with Kravchuk and two other former leaders Leonid Kuchma and Viktor Yushchenko on Tuesday, it said.

Ashton due in Kiev Tuesday

Hundreds of thousands had on Sunday filled Independence Square to bursting point to denounce Yanukovych's rejection of an EU pact under Kremlin pressure, in the biggest protests since the 2004 Orange Revolution.

In a hugely symbolic denouement to the rally, dozens of masked protesters, some brandishing flags of the ultra-nationalist Svoboda (Freedom) party, tore down a 3.4 metre (11 feet) high statue of Lenin after putting a rope noose round his neck.

Police opened a criminal probe into "mass riots" over the felling of the monument but said Monday that so far no-one has been arrested over the incident.

Protesters have seized control of Independence Square for over a week, setting up a tent city. The protesters have also occupied Kiev city hall with dozens again sleeping there overnight on Sunday.

Ukraine's Security Service (SBU) said it had opened an investigation into alleged attempts by politicians to seize power, in an apparent bid by the state to target key opposition figures.

The size of Sunday's protest, the third mass rally in successive weekends, increased the pressure on Yanukovych who further galvanised his opponents by meeting Russian President Vladimir Putin in almost total secrecy on Friday.

Analysts believe Russia may have offered Ukraine cheaper gas and billions of dollars in aid in exchange for joining the Customs Union at Yanukovych's closed-door meeting with Putin on Friday in Sochi.