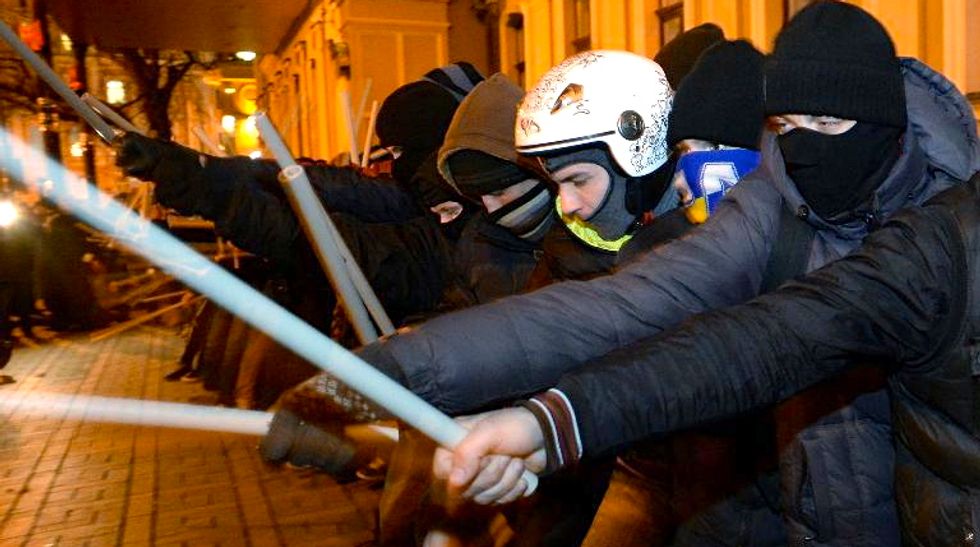 Hundreds of thousands of pro-EU Ukrainians rallied in Kiev on Sunday for a new protest aimed at forcing President Viktor Yanukovych to resign after he sparked fury by rejecting an EU pact under Kremlin pressure.

Jailed Ukrainian ex-premier Yulia Tymoshenko said the opposition was demanding the "immediate" resignation of Yanukovych, in a statement to the mass rally read by her daughter that was met by chants of "resign!" from the throng.

"Yanukovych took a decision to join the club of dictators," Yevgenia Tymoshenko quoted her mother as saying in a message from detention. "We must peacefully and legally oust him from power."

"He is no longer the president of our state, he is a tyrant who must answer for every drop of blood that has been shed," she added.

Some of the protesters wore helmets in an apparent attempt to protect themselves in the event of possible clashes with riot police as a priest read a prayer from stage.

Trademark nationalist chants reverberated through the overcrowded Kiev metro as more protesters sought to join the protest. "Glory to Ukraine!" they shouted. "Glory to heroes!" replied others.

Yanukovych's decision to drop political and free trade agreements with the EU in favour of tighter Russian ties and a crackdown last week on protestors plunged the ex-Soviet nation into its worst political crisis in a decade.

The president on Friday incensed the opposition and its supporters further by discussing the signing of a strategic partnership treaty with Russian President Vladimir Putin, who wants Ukraine to join a Moscow-led Customs Union.

"The Customs Union is another Soviet Union. We've already been there," said protester Olexander Kovalenko.

'An ultimatum of the Ukrainian people'

The protests in Ukraine have raged for over two weeks after the government abruptly announced it was halting the work on the agreements with the European Union.

Last Sunday, hundreds of thousands took to the streets in Kiev and pro-EU western Ukraine in the largest demonstrations since the pro-democracy Orange Revolution in 2004 forced the annulment of fraud-tainted elections initially claimed by Yanukovych.

The rally in Kiev descended into unprecedented clashes with riot police in which hundreds were injured.

The protestors subsequently occupied Independence Square, keeping police out by erecting barricades around it. They also seized the Kiev City Hall, with dozens sleeping there overnight.

Boxing champion turned opposition leader Vitali Klitschko had said a million should take to the streets of Kiev on Sunday.

Yanukovych, who faces an election in 2015, has promised a thorough investigation into the use of force against the protesters but has not said whether he is ready to sit down for talks with the opposition.

Putin has slammed the protests, saying they looked more "like a pogrom than a revolution" but the West has urged the Ukrainian authorities to heed the demands of the protest movement.

Elmar Brok, chairman of the European Parliament's foreign affairs committee, said during a visit to Kiev on Saturday that the bloc may introduce travel bans against those responsible for the use of violence against the protesters.

"Aggression should be punished," Brok told reporters, saying that those responsible would otherwise "not have an opportunity to come to the EU".

Tymoshenko, who had hoped to be released for treatment abroad as a result of the EU deal, has called on the West to impose sanctions against Yanukovych and his family including his son Olexander, one of the country's richest men.

Economists have said the protests risk exacerbating an already serious economic crisis and causing a crash in the value of its currency.

The Ukrainian government rejected the pact with the EU, citing Russian threats of sanctions and the EU's failure to deliver financial support.

Analysts believe Russia may have offered Ukraine cheaper natural gas and billions of dollars in aid in exchange for joining the Customs Union at Yanukovych's closed-door meeting with Putin on Friday in Sochi.

Both Ukrainian and Russian authorities have said no deal was signed in Sochi and rejected speculation that Yanukovych had promised Putin to join the Customs Union by 2015 in return for aid.