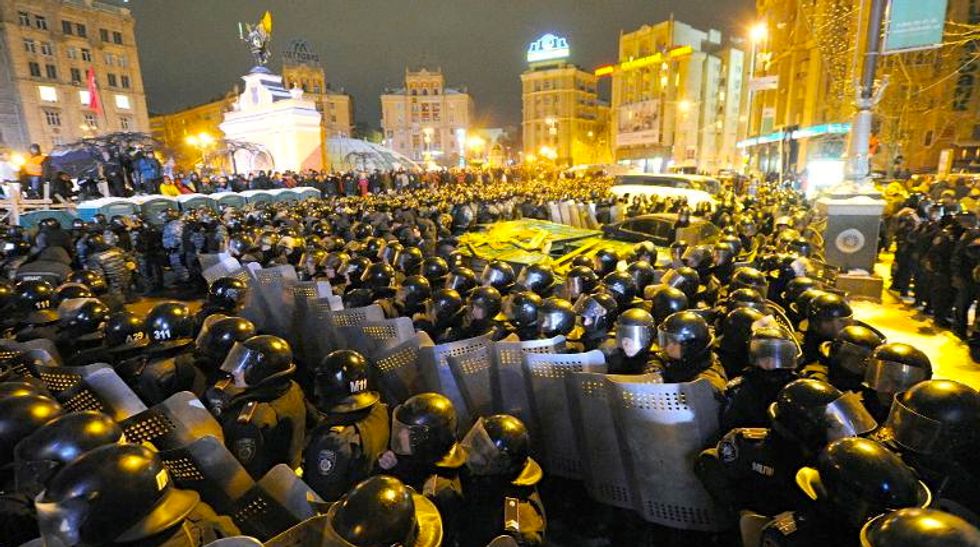 Ukrainian demonstrators on Wednesday forced security forces to retreat after a failed pre-dawn raid on their protest camp, in a blow to the authority of President Viktor Yanukovych after nearly three weeks of rallies against his rule.

International pressure mounted on the embattled leader with US Assistant Secretary of State Victoria Nuland visiting the protestors in Kiev and telling the president the attempted police crackdown was "inadmissable".

Several dozen were injured in the early hours of Wednesday when riot police and interior ministry special forces moved against the demonstrators who have occupied Kiev's Independence Square in anger at the rejection of an EU pact.

But rather than dispersing, thousands more protesters arrived to outnumber the security forces who were eventually forced into a humiliating retreat amid cheers from the demonstrators.

"We have not won the war yet but we've decisively won this battle. The authorities are panicking. We will continue to stand up for our country," said protester Anton Kulyk.

The police move sparked unprecedented international criticism of Yanukovych, with US Secretary of State John Kerry expressing "disgust" at the crackdown.

In an extraordinary choice of timing, the raid came as Nuland and EU foreign policy chief Catherine Ashton were in Kiev for talks with Yanukovych.

Nuland stressed there was still a way for the ex-Soviet country to become part of Europe and in a show of solidarity went to Independence Square to meet the protesters as the police retreated.

The withdrawal of the security forces has left the outcome of the protests even more uncertain, with the opposition now vowing to do everything to topple Yanukovych's regime.

Thousands of armoured police had seized control of Independence Square by forming a human chain, and tore down the barricades that protestors erected there in anger at Yanukovych's rejection of the EU pact under Russian pressure.

But the demonstration persisted, with thousands of protesters arriving as morning broke.

Protestors finally massed in enough numbers to regain the upper hand, thwarting a bid by security forces to retake Kiev city hall, which has been occupied by some 200 opposition activists for over a week.

Police outside the building used truncheons to beat protestors, who responded with sticks. Activists in the upper storeys of the building doused the police with freezing water from a fire hose, forcing them to leave.

Activists cheered as police left Independence Square, and the opposition set about rebuilding its barricades.

City authorities said 30 people including protesters and police sought medical help and half of them were hospitalised.

Opposition leader Arseniy Yatsenyuk called for a millions-strong protest in Kiev after the police actions, predicting that the regime of Yanukovych would fall.

"We will not forgive this. Here there will be millions and his regime is going to collapse," Yatsenyuk, the leader of the party of jailed ex-premier Yulia Tymoshenko, told protesters on Independence Square.

"Yanukovych spat in the face of the United States and the EU member states," he said.

World boxing champion and leader of the UDAR (Punch) opposition party Vitali Klitshcko told the protesters: "Kievans rise up! Only together can we win our right to live in a free country."

Yanukovych's decision to scrap key trade and political agreements with the EU, coupled with police violence against protesters, have plunged the ex-Soviet country into its most acute political crisis since the 2004 pro-democracy Orange Revolution.

The US Secretary of State said Washington "expresses its disgust with the decision of Ukrainian authorities to meet the peaceful protest... with riot police, bulldozers, and batons".

Ashton, who was also in Kiev to meet Yanukovych, said she was "deeply concerned about last night's action taken by riot police."

"I have been very much impressed with the peaceful and courageous nature of the ongoing protests in support of European aspirations," she said in a statement.

"I condemn the use of force and violence -- which cannot be the answer to peaceful demonstrations -- and I call for utmost restraint."

In a sign of Europe's support for the demonstrators, Ashton late Tuesday like Nuland personally visited Independence Square, known locally as the Maidan.

Prime Minister Mykola Azarov said on Wednesday that cash-strapped Ukraine needed a 20-billion-euro ($27.5-billion) loan from the European Union before it signs the historic association pact with the 28-nation bloc.

However it remains to be seen how the money could be disbursed given the controversy over the crackdown.