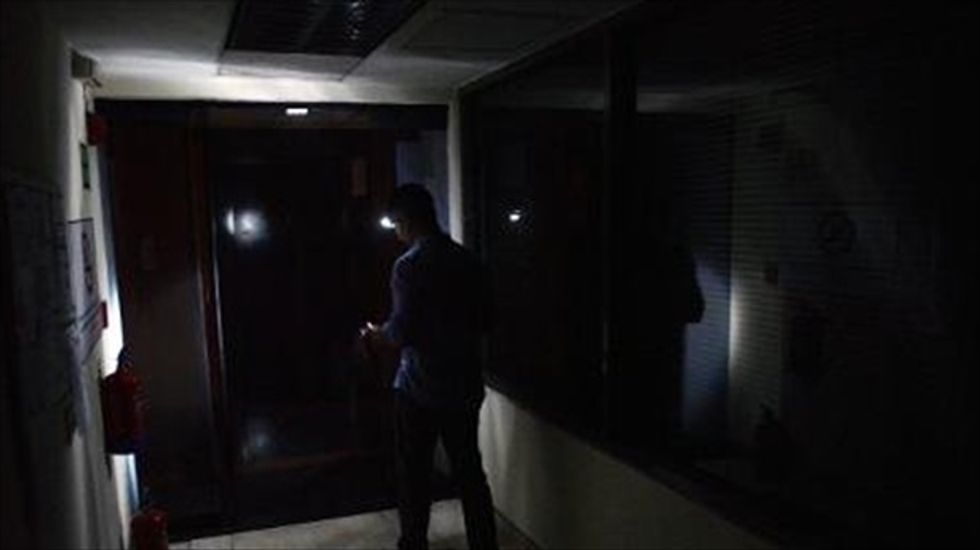 A man wearing a head lamp walks inside a building during a general blackout in Caracas on Dec. 2, 2013 [AFP]

A blackout that plunged much of Venezuela into darkness as President Nicolas Maduro spoke on TV was caused by a ruptured conductor in a transmission line, the government said Tuesday.

"The system is 30 years old and a failure of this kind has never occurred," Electricity Minister Jesse Chacon, as the government continued to suggest that sabotage was behind the power cut.

Maduro blamed the three hour outage Monday night on what he said were "conspiracies" ahead of the country's December 8 municipal elections.

"There are attacks on the electricity service to disconnect it for days," he said. "They aren't going to make us suspend the elections."

"Just before the blackout there was an oscillation in the network, which generally occurs when transmission limits are exceeded, causing a failure that activates the security systems," he said.

He said transmission lines were long and vulnerable to a "weather event, rain, lightning or a storm."

He also noted that the government had sent troops to protect the electrical system after a similar outage in the same place in September.

"It would be very difficult for someone to gain access to the system," he said.

Maduro, a former union leader and bus driver, is struggling to establish the stature and following enjoyed by his political mentor Chavez, who died of cancer in March.

The December 8 municipal elections are considered a test of Maduro's popularity and performance since taking power.

Chacon said the outage hit the metropolitan Caracas region and states in central and western Venezuela.

He said it started in the same place where a blackout in September left 70 percent of the country without power for at least three hours.

Then, too, the leftist Maduro blamed his political opponents.

In Caracas, cars drove through darkened streets. Only hotels and other buildings with emergency generators had some light.

In 2010 Chavez imposed severe electricity rationing because of what he called problems with Venezuela's main hydroelectric dam and wasteful use of energy.

In April, Maduro declared another electricity emergency and extended it in August for another 90 days, even though he said the sector had improved considerably.

Despite being one of the world's largest oil producers, Venezuela is regularly affected by power cuts.