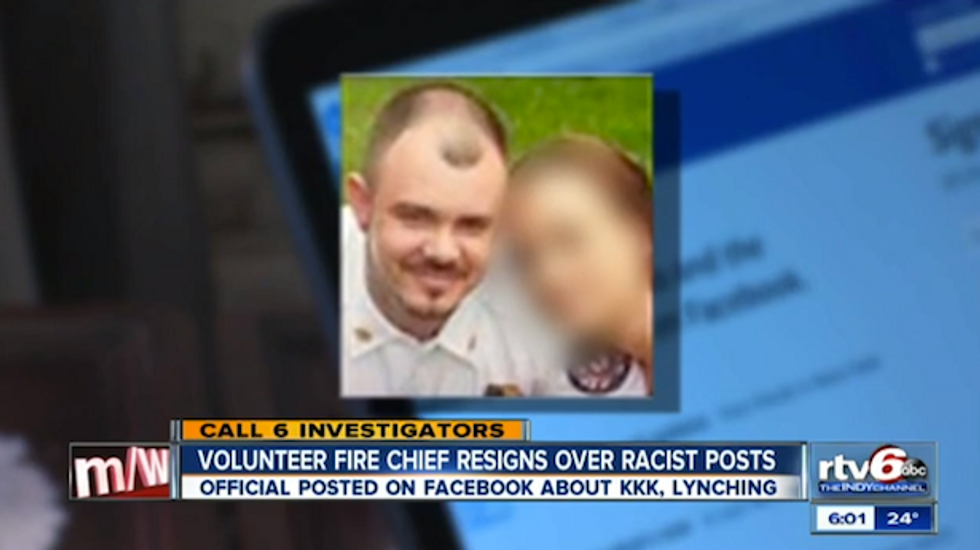 A volunteer fire chief in southwestern Indiana resigned Tuesday after posting outrageously racist rants on social media, but he still doesn’t understand why people were upset.

Chief Sean Sargent used racial slurs and admitted he was a racist who supported the Ku Klux Klan and lynching.

"I’m just gonna come on out and say it! I’m a full blown racist, I dare a dirty (racial expletive) to try and knock me out, and oh yeah! Support your local klan!!!" Sargent said in one Facebook post.

He also asked what you would call “1000 (racial expletive) at the bottom of the sea,” saying it would be “a good (expletive) start.”

The 31-year-old Sargent had worked for the rural Owensburg Jackson Township volunteer fire department since he was 15 years old and had been chief for about a year, but a township trustee said the posts could not be tolerated.

An emergency medical technician said she was shocked when she saw Sargent’s posts on Facebook.

She sent a message to Sargent, who admitted that he’d made the posts.

Sargent said he was planning to leave the department next month, anyway, for a new job in Greenwood, Indiana.

He said he’d made the posts “to get a reaction,” but he denied they were intended to disparage any particular race but were directed generally at lazy people who don’t want to work, have multiple children and live off welfare.

"Everyone should be a productive member of society," Sargent said. "I have an issue with anyone who is being lazy or taking advantage of the system."

Sargent said that he’d never treated citizens differently due to their race while performing his job duties, although Greene County is almost entirely white, at 97.2 percent.

"It doesn’t matter what race you are," he said. "I think this whole thing was turned into more than it really should have been."

Sargent admits he shouldn’t have “lashed out,” but denies that he’s a racist – despite describing himself as one in a Facebook post and admitting that he’d contributed money to the KKK.

"As for the KKK, I'm looking for some place where I can be proud to be a white American," he said, adding that he does not believe the organization is a racist group.

"The Klan is not about threatening people," he said. "I opened their website and started looking into the Klan, an organization you can join to be proud of your white heritage."

Sargent, who said he had a black family member, said he couldn’t understand why it was acceptable for black people or gay people to promote pride in themselves, but not white people.

"No matter what anybody wants to say, there is still a thing called freedom of speech,” he said. “I can say whatever I want, whether I feel that way or not. In America, you have that freedom."