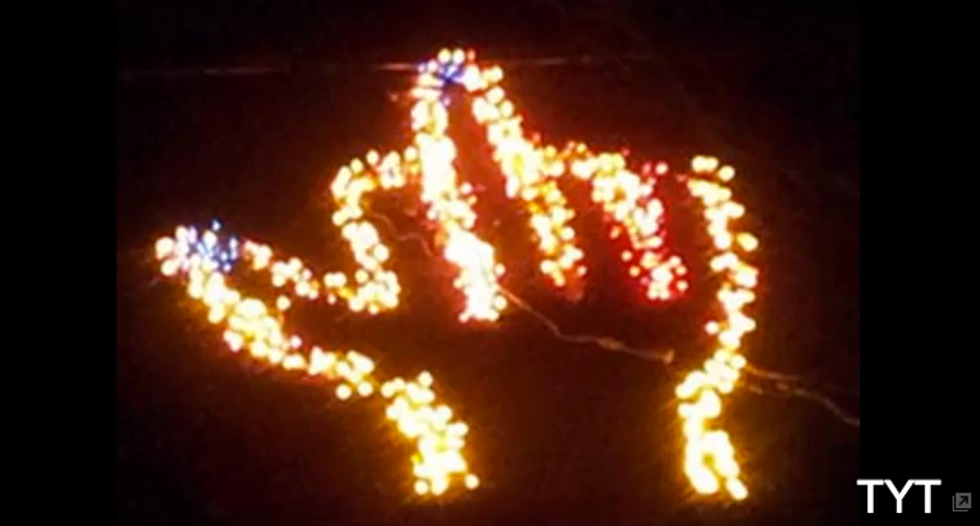 After winning a court battle protecting her right to give her neighbors the finger with a rooftop Christmas light display, a Louisiana woman intends to give them a double-barrel salute this year.

Sarah Childs, of Denham Springs, set up a display last year in the shape of a hand with an extended middle finger directed toward her next-door neighbors – with whom she’s been feuding for years and has accused of stealing her dog.

"She's crazy," said neighbor Kayla Weldon, the target of her anger. "She thinks she's going to get famous from all this crap."

Other neighbors complained about the incandescent vulgar display and police asked Childs to take it down.

She initially agreed to do so, but then a neighbor said something that annoyed her, so she decided to fight the order.

The ACLU helped Childs sue the city in federal court, and a judge granted a restraining order preventing Denham Springs from interfering with the display.

The city initially fought back, arguing the display shouldn’t be protected under the First Amendment because it amounted to “fighting words.”

But city officials agreed not to interfere after a court settlement in January.

Childs, who no longer lives in the house -- which is now empty -- after divorcing her husband, said frustration over personal issues led her to set up the display again, and neighbors immediately complained.

Then someone (Childs suspects her next-door neighbors) climbed onto the roof and cut the display into pieces.

“They went on my roof, cut them all up, cut everything up,” Childs said.

So she climbed back onto the roof Tuesday and replaced the middle finger display – and added another one.

Police said they would investigate the case if Childs called them, but she said she’s dealing with the issue herself because the police “hate” her.

The city attorney said Denham Springs officials would comply with the court settlement, but neighbors said they were upset by the display.

“She doesn’t live there,” said Todd Traylor, who lives several house away. “I don’t even know why she’s back.”

Watch this video report about the case last year posted online by The Young Turks: