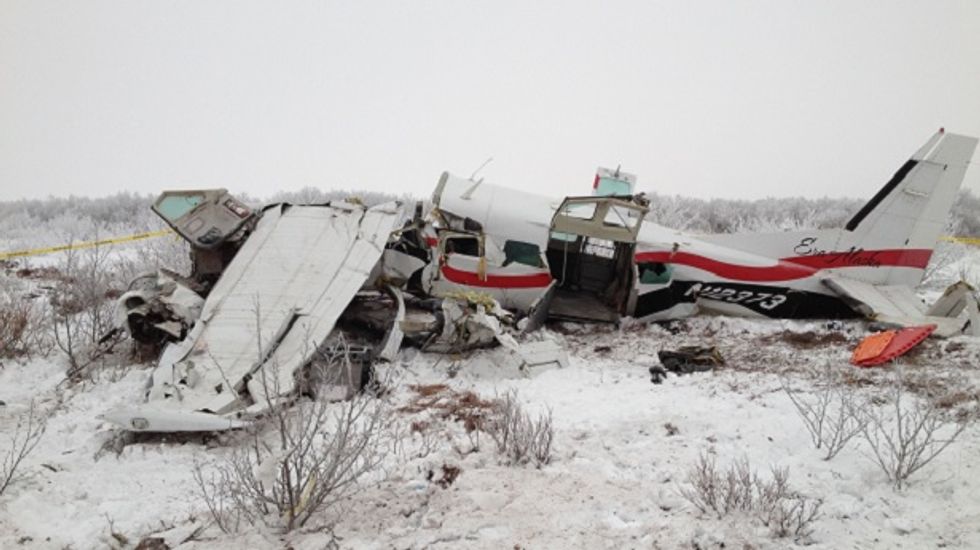 Melanie Coffee's infant child Wyatt was dying. She had called for help, and a police officer had been trying to talk her through resuscitation, but it wasn't working. Beside her, three other people lay dead or dying as well in the small turboprop plane, lost in snow and fog cold enough to freeze on contact after the crash in remote Alaska.

All that was left to her was to find some help before everyone else died too. So she left her five-month-old child behind to trudge toward a red blinking light and what might pass for hope a mile away in the darkness.

The crash Friday near the village of Saint Marys in Alaska remains under investigation by the National Transportation and Safety Bureau, which is having trouble reaching the remote area, the AP reported Sunday.

Coffee, 25, of Mountain Village is being hailed as a hero for helping rescuers find the downed craft, the Washington Post noted.

Alaska state troopers identified the victims of the crash as Terry Hanson, 68, the pilot, as well as Richard Polty, 65, Rose Polty, 57, and Coffee's son Wyatt, all of Mountain Village. Six others -- Kylan Johnson, 14; Pauline Johnson, 37; Tanya Lawrence, 35; Garrette Moses, 30 and Shannon Lawrence -- all of Mountain Village, were injured in the crash of the Hageland Aviation Cessna 208.

Local police received a call from her at around 7 p.m., from the crash. "She was trying to do CPR to her newborn baby," said Saint Marys Village Police Officer Fred Lamont Jr. He and others set out to find the crash, but freezing fog hampered the search.

After abandoning other options, Coffee set out on foot toward a GCI communications tower with a red strobe, near the village landfill. The crash site was so inaccessible that it could not be reached by snowmobile, much less a conventional vehicle.

Rescuers pulled the dead and injured from the plane onto stretchers, to bear them to the airfield and medical attention.