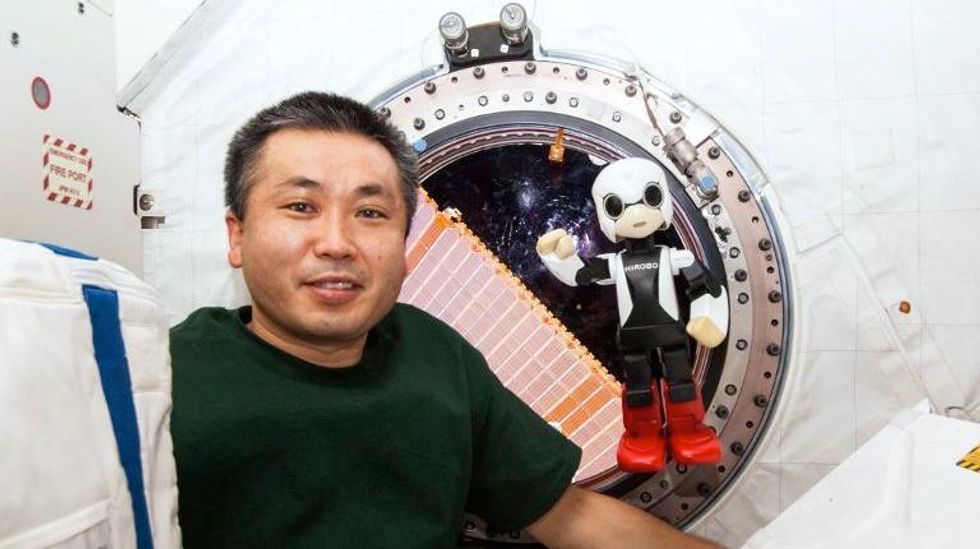 The world's first robot astronaut has begun chatting to the Japanese commander of the International Space Station, in what was being billed as the first conversation of its kind.

Kirobo, a pint-sized android equipped with artificial intelligence and capable of learning how to respond appropriately to humans, even put a marker down for Christmas, telling Koichi Wakata he expected a visit from a certain man bearing gifts.

"Santa Claus will come to space," Kirobo, wearing a Santa hat, told Wakata as they drifted in zero gravity hundreds of miles (kilometres) above the Earth.

"What will you ask for from Santa Claus, Kirobo?" asked the Japanese astronaut.

The unscripted conversation, in Japanese, was held on December 6, with footage unveiled on Friday. It is part of a longer-term project to see how a robot can act as a companion for isolated people, particularly to see if it can develop conversational skills.

The wide-eyed and bootie-wearing Kirobo -- roughly the size of a chihuahua -- left Earth on a cargo-carrying rocket and reached the space station on August 10.

Wakata along with Mikhail Tyurin of Russia and NASA astronaut Rick Mastracchio joined him at the ISS in November.

"We've had some trouble before having the robot carry on the conversation smoothly," said developer Tomotaka Takahashi.

"When people develop a relationship, it is an accumulation of small bits of communication. Small things make it work or not work," he said. "We've learnt important tips to develop a robot that can communicate with people more."

Kirobo and his interlocutor managed several minutes of spontaneous conversation aboard the ISS, which included the robot giving very general opinions.

"How was it when the rocket launched?" Wakata asked the machine.

"It was exciting!" Kirobo replied.

Kirobo and a twin android, Mirata, which stayed on Earth were created jointly by advertising firm Dentsu, the University of Tokyo, robot developer Robo Garage and Toyota.