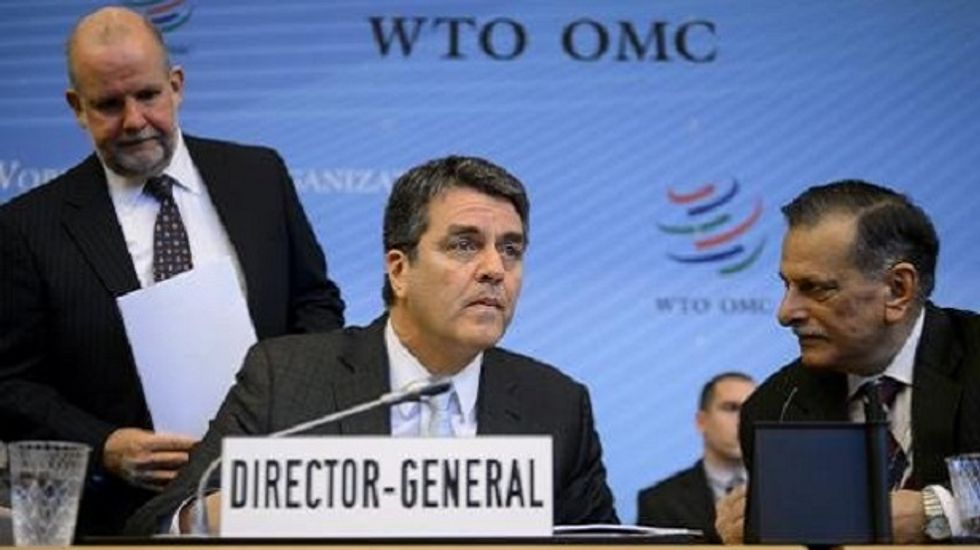 The World Trade Organization (WTO) on Saturday struck a “historic” deal on international commerce that could add up to $1 trillion to the global economy.

The agreement falls far short of the WTO's lofty but elusive vision of tearing down global trade barriers through its frustrating, 12-year-old Doha Round of talks.

But the accord reached on the Indonesian resort island of Bali nevertheless marks the first global agreement struck by the Geneva-based body since its 1995 founding.

"For the first time in our history, the WTO has truly delivered," an exhausted but relieved WTO director-general Roberto Azevedo told a closing ceremony.

The Washington-based Peterson Institute for International Economics estimated in a report this year the customs measures could create $1 trillion in economic activity and 21 million jobs if properly implemented.

The report did not detail how those figures were calculated.

WTO officials have conceded however that uncertainty surrounded how effectively the measures would be implemented, especially in underdeveloped countries.

Analysts said the hard-fought nature of the talks indicated how difficult it could be for the body to make real progress on the Doha Round, launched in Qatar in 2001.

Failure in Bali "would have dealt a massive blow to the institution's prestige," said Simon Evenett, an international trade expert at Switzerland's St. Gallen University.

The agreement was reached after more than four days of haggling in Bali that stretched past the conference's scheduled Friday close.

Azevedo said it had important symbolic value for Doha.

"The decisions we have taken here are an important stepping-stone toward the completion of the Doha Round," he said, adding the WTO would soon get to work on a "road map" for reviving Doha.

The Doha Round aims to remove hurdles to commerce and establish a globally binding framework of trade rules fair to both rich and poor countries.

But protectionist disputes among the WTO's 159 members have foiled agreement.

Azevedo has expressed concern over the rise of alternative regional trading pacts that he fears could render the WTO obsolete if it did not start clinching major worldwide agreements.

The Bali negotiations teetered repeatedly on the brink of collapse due to various differences.

India -- which aims to stockpile and subsidise grain for its millions of poor -- had demanded that such measures be granted indefinite exemption from WTO challenge.

The United States, which implements large farm supports of its own, and others had said India's grain policy could violate WTO limits on subsidies.

A later hurdle emerged as four Latin American countries objected to the removal in the accord's text of a reference to the US embargo on Cuba.

Compromise wording smoothed over those hurdles.

As the Doha Round has faltered, alternative regional pacts have emerged between major trading nations, such as the 12-country Trans-Pacific Partnership (TPP) spearheaded by Washington.

TPP negotiators hold their latest meeting in Singapore starting Saturday as they work to hammer out the outlines of that trade alliance.

Azevedo has said such alliances could have "tragic" consequences on poor nations by denying them a place at the trade-rules table.

But Kevin Gallagher, a globalisation expert at Boston University, said the hard fight in Bali for modest results indicated the WTO's battle for relevance was far from over.

"Rather than honouring the multilateral process, powerful nations will move to regional trade deals such as the TPP to advance harmful proposals that were rejected at the WTO," he said

Analysts on CNN reacted with shock on Tuesday at the first witnesses called by attorneys for former Minneapolis Police Officer Derek Chauvin, who is accused of murdering George Floyd in 2020.

CNN's Laura Coates spoke out following the testimony of Michelle Moseng, a former paramedic who treated Floyd in 2019. Earlier in the morning, former officer Scott Creighton testified about Floyd's unrelated drug arrest in 2019.