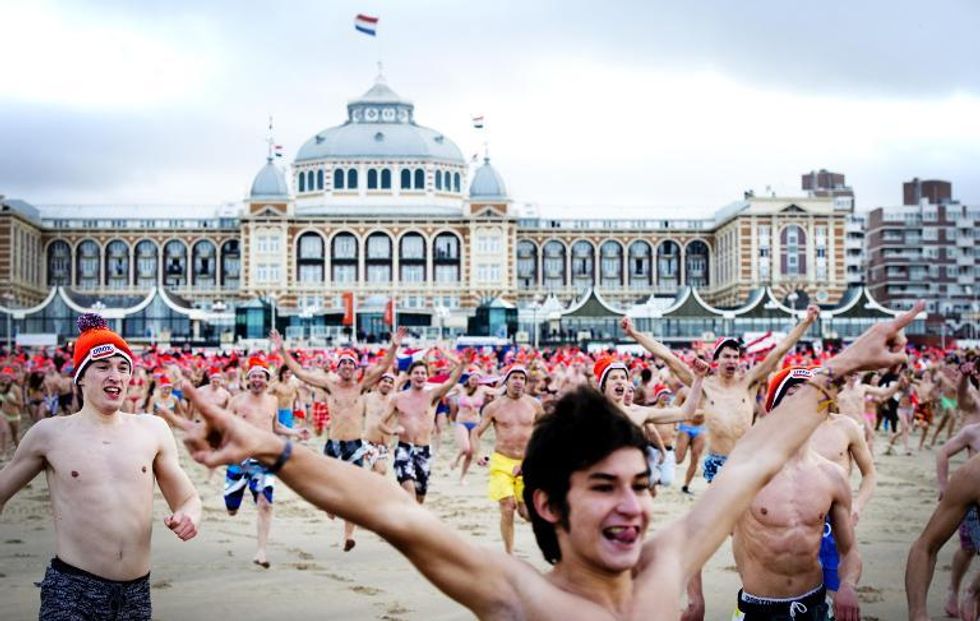 Tens of thousands of revellers across the Netherlands braved the chilly winter weather on Wednesday to take a traditional New Year's plunge in the North Sea's icy waters.

Around 10,000 swimmers -- most dressed only in shorts and bikinis -- stormed the waves at The Hague's historic Scheveningen beach, while around 34,000 others did the same in 125 locations around the lowlands country, organisers said.

The so-called "Nieuwejaarsduik" (New Year's Dive) started in 1960 when a few friends decided to go for a swim to herald in a fresh start to the new year, organiser Esther Okker told AFP.

Since then it has grown into an annual tradition, with swimmers receiving a coveted orange beanie hat and a tin of Dutch pea soup as a reward from the event's sponsors.

Okker said conditions were "relatively warm" this year with the ocean around 7.5 degrees Celsius (45.5 degrees Fahrenheit) and outside temperature at around 8.0 degrees.

However, the omnipresent wind on the beach chilled things down to around 3.0 degrees, she added.

"You have to do it at least once in your life," said Dennis Smit, 20, who was "sunbathing" with his girlfriend Nicole Timmerman, 17, after returning from the water's edge.

Brothers Beau and Jarvey de Graaff, who was dressed in a tiger's outfit, told AFP it was the first time they were taking part in the swim.

"Yes, we may be crazy, but we are Dutch and this is tradition," Jarvey de Graaff, 22, said.

"It may be tradition, but it still was very, very, very cold," a shivering bikini-clad swimmer who declined to give her name, quipped afterwards before running into a heated tent to get dressed.