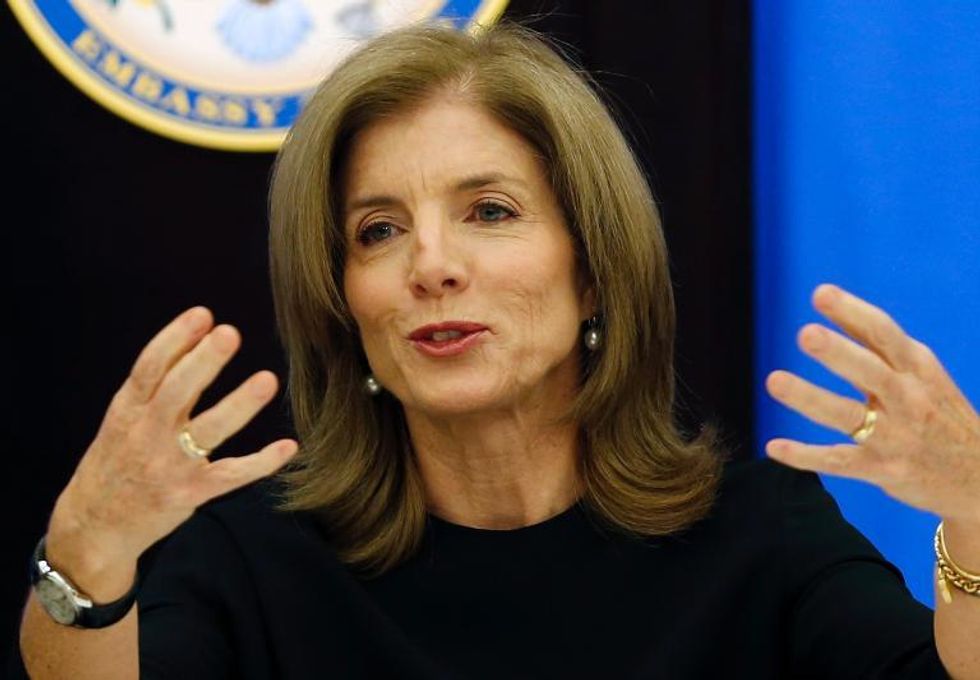 The US ambassador to Japan should visit Taiji to see the "humane" killing methods used in the dolphin hunt, a local fisheries official said Tuesday, days after Caroline Kennedy tweeted her disapproval of the slaughter.

His comments came as campaigners watching the hunt said the butchery was under way, adding that the waters of the cove were red with the dolphins' blood.

The official, who did not wish to be named, said Kennedy, the only surviving child of assassinated US President John F. Kennedy, should also see for herself how the hunt supports the local economy.

"This is a very small town in the countryside. We have no other major industries," he told AFP.

Kennedy stepped into the row on January 17 when she tweeted: "Deeply concerned by inhumaneness of drive hunt dolphin killing. USG (US Government) opposes drive hunt fisheries".

The mass slaughter of the animals came to worldwide attention with the Oscar-winning film The Cove, which showed how the fishermen of Taiji corral dolphin pods in the bay.

Some of the prettier animals are removed and sold to aquariums while others are butchered for meat, which is consumed in a small number of coastal communities. It is not widely eaten in Japan.

The Cove graphically showed the deaths of the animals, whose blood turned the water red as they were stabbed.

But the Taiji official said hunters no longer killed dolphins in that way.

"I want the ambassador to see the reality here. We appreciate the gift of food we get from taking the precious life of animals," he said.

"We cut the spinal cord so that they don't bleed"

"We have switched to a more humane way of butchering them," he said. "We cut the spinal cord so that they don't bleed. We don't butcher them like before.

However, activists from militant environmentalist group Sea Shepherd, who have been streaming live video footage from the area, said plenty of blood was in evidence, despite attempts by the fishermen to hide their cull with tarpaulin.

"Water of the cove continues to run red with the blood of innocent Bottlenose dolphins who have been murdered," the @CoveGuardians Twitter account said.

The blood was not immediately apparent from footage on the organisation's website.

A local official told AFP on Sunday that killing had begun, but refused to reveal how many animals had died.

Kennedy's weekend intervention was followed Monday by the publication of an open letter by John Lennon's Japanese widow, Yoko Ono, who called on the fishermen to end the hunt because of the impact it had on the image of Japan abroad.

Japanese officials have hit back, accusing campaigners of double standards and saying the hunt is part of the country's culture.

"We take away lives of animals like cows and pigs daily," said Yoshinobu Nisaka, governor of Wakayama prefecture, where Taiji is located. "I don't think it is logical to say that it is only cruel to eat dolphin meat."

In Tokyo, the central government said it would be explaining Japan's position to Washington in the wake of Kennedy's tweet.

"Whales and dolphins are an important marine resource, which should be sustainably used based on scientific data," top government spokesman Yoshihide Suga said.

Prime Minister Shinzo Abe's Facebook page has been inundated with comments, unrelated to the photos and news that he posted, with a war of words between those for and against whaling and dolphin hunting.

"Japan is not innocent...not when its fishing fleets still illegally hunt whales in the Antarctic under the guise of 'research'", Ariel Guico commented.

Shiori Ueno wrote: "Foreigners. Leave this page as soon as you are done with your tirades."

A common response to the Colorado primary election results this week was to remark that Republican voters rejected the election conspiracists, returned the party to the mainstream, signaled support for the establishment over the fringe.

It’s true that in several high-profile races the most reality-challenged, “team crazy” candidates got beat bad. That’s a relief.