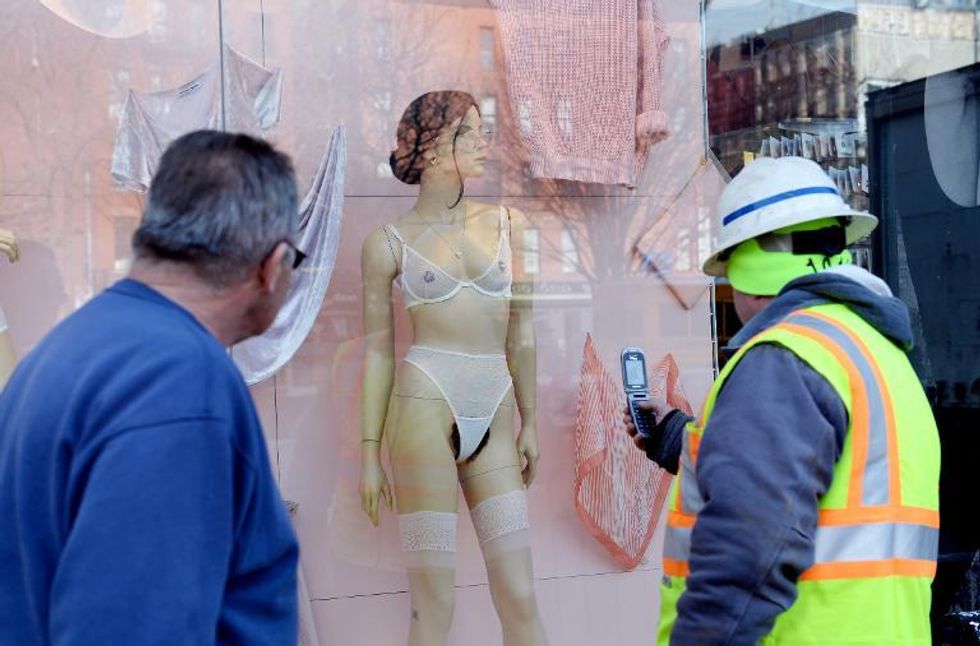 US clothing chain American Apparel has sparked controversy by putting mannequins sprouting pubic hair in the windows of their shop in New York's boho Lower East Side.

Passersby stopped to gawk, take photographs, chuckle or raise a horrified eyebrow at the stick-thin plastic models decked out in see-through bras and panties, with bushy bikini lines.

But American Apparel, which in the past has been accused of sexist and controversial marketing campaigns, said it was celebrating "natural beauty" in the run-up to the Valentine's Day rush.

"We invite passers-by to explore the idea of what is 'sexy,' consider their comfort with the natural female form -- and perhaps most importantly -- to come in and try on some of our favorite styles of the season," said creative director Iris Alonzo.

Layla Khabiri, who works in a wine bar and lives round the corner, called it a "cheap ploy" designed to drive up sales, but found it interesting for being a "little counter-culture."

"As someone who has some hair, it's nice. It's not earth shattering," she said.

The hairy mannequins are currently on show only at one American Apparel store in lower Manhattan, and there are no plans to roll out the look elsewhere in New York or in the United States.

Customers were divided on whether it would make them splurge on Apparel underwear -- either for themselves or that special woman in their life this Valentine's Day, which falls on February 14.

"It's not working for me but I did stop, and it did catch my attention, too. Maybe that's their point," said web developer Eric Chiu, 33, as he stopped to take some pictures.

"I love it," he told AFP. "It's just awesome," a cigarette dangling out of his mouth as he stopped to take pictures.

"They're real-life looking to me. Although, most women today do shave a little more down there!" he added.

Minjung, a student out jogging, also stopped to take a picture. But would it make her buy the underwear? No.

"It's pretty cool, but it is kind of weird," she said, smiling.

During her speaking time, Boebert mentioned that American taxpayers were "defrauded a possible $560 billion as a result of the federal government's negligence in carrying out these federal COVID relief funding programs."

An early morning shooting spree that ended at a Washington, D.C. metro train station has killed a metro worker and injured three other people, as reported by ABC News.

The shootings began around 9 a.m. after a confrontation on a public bus when the suspect shot a person in the leg. The next victim was shot close by at the Potomac Metro Avenue Station during the middle of a metro card transaction.