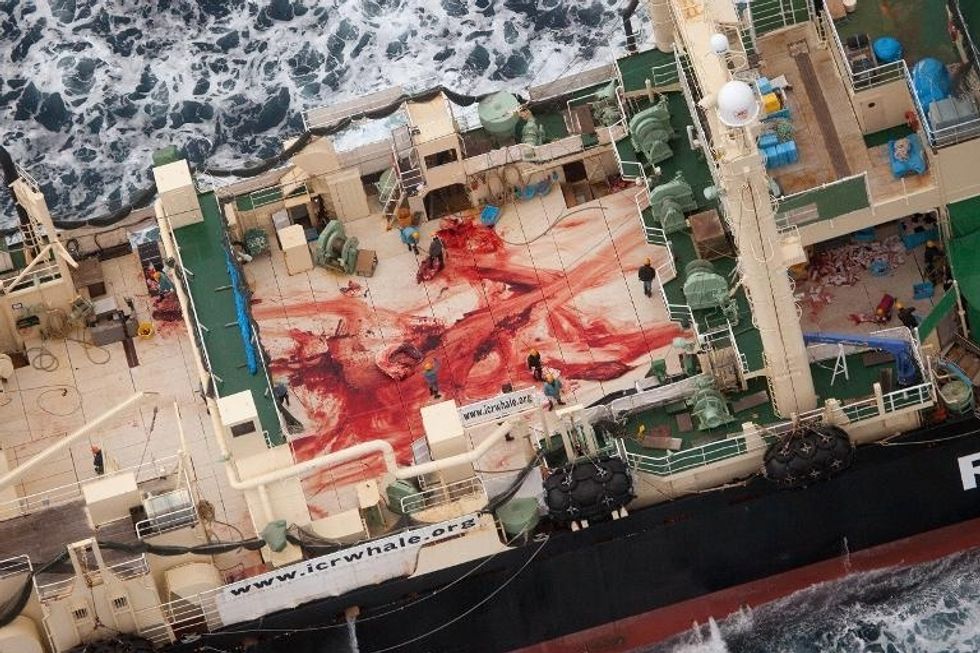 Militant anti-whaling activists Sea Shepherd said they had zeroed in on a Japanese fleet Monday and captured evidence that four whales had been slaughtered, alleging the ships were found inside a Southern Ocean sanctuary.

Sea Shepherd said it had located all five Japanese vessels and was now in pursuit, forcing the harpooners to cut short their operation and retreat.

The group released footage and photographs showing three minke whales dead on the deck of the factory ship Nisshin Maru and said a fourth, also believed to be a minke, was being slaughtered when Sea Shepherd's helicopter flew overhead.

"There's three carcasses on the ship, a fourth carcass has been cut up. There's blood all over the place, meat being carted around on this factory ship deck, offal and innards being dumped in the ocean," said Sea Shepherd Australia chairman Bob Brown.

"That's just a gruesome, bloody, medieval scene which has no place in this modern world."

When the Nisshin Maru was first spotted from the air, Brown said it was in Antarctica's Ross Dependency, within New Zealand's territorial waters and the Southern Ocean Whale Sanctuary, which he described as a "gross breach of international law".

The commercial hunting of whales is prohibited in the sanctuary, which was designated by the International Whaling Commission (IWC) in 1994, but Japan catches the animals there under a "scientific research" loophole in the moratorium on whaling.

"The New Zealand government has repeatedly called on Japan to end its whaling programme. We reiterate this message today," he said.

Japan's fisheries agency said its programme was being conducted "in line with a research plan submitted to the IWC".

"We are not aware of the existence of a whaling sanctuary so we don't want to comment on their arguments," an agency spokesman said of Brown's claims.

The Japanese foreign ministry said research whaling was "not a violation or an abuse of a loophole in the international convention".

"Quite the contrary, this is a legitimate right of the contracting party under Article VIII of the International Convention for the Regulation of Whaling," it said.

Brown described "massive violence" against the whales, using grenade-tipped harpoons to catch them, and said Sea Shepherd would do "all it peaceably can to prevent this grotesque and cruel destruction", also urging Australia and New Zealand to take action.

"There is nothing scientific about this, it is butchery," Brown said.

"The one thing that's missing here is gumption -- a bit of spine in Canberra and in Wellington to put an end to it."

Australia has taken Japan to the International Court of Justice seeking to have its research whaling programme declared illegal, with a ruling due this year.

Australia's Environment Minister Greg Hunt said the government's opposition to whaling was "well known" and it "continues to remain hopeful that the International Court of Justice will soon make its ruling."

In the meantime, he said Canberra would dispatch a government jet to fly over the whaling zone and monitor confrontations between Sea Shepherd and the Japanese.

"The aircraft will be able to monitor activities over a large area. It sends a clear message that the Australian government expects all parties to abide by the laws of the sea," said Hunt.

High-seas clashes between the two groups are common, resulting in the 2010 sinking of the Sea Shepherd vessel Ady Gil.