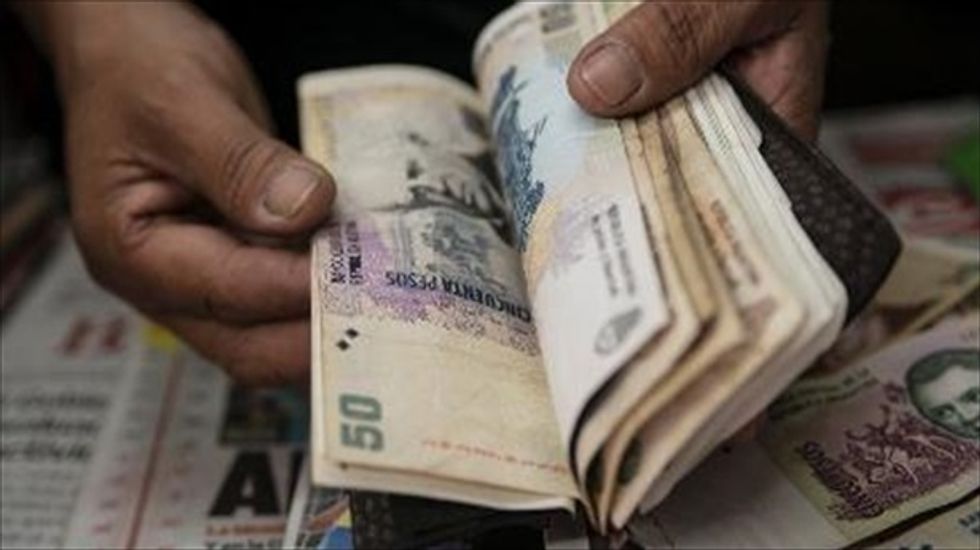 Argentina appears powerless in the face of the hemorrhage of the peso, as the central bank reported Thursday it had burned through $2.1 billion in reserves in January alone.

The government is struggling to beat back a mounting rush into dollars that has stoked 26 percent inflation despite price controls on many items and pressure on businesses to avoid price increases.

Foreign reserves, crucial to service foreign debts and pay for needed imports like fuels, have tumbled from $52 billion at the beginning of 2011 to $28.5 billion as of January 30, according to Central Bank data.

The reserves fall points to the deep problems in Latin America's third largest economy, behind Brazil and Mexico.

"It's dangerous, coming at a time when Argentina cannot intervene any more via the central bank, and the peso is going to depreciate more," said French economist Stephane Straub of the Toulouse School of Economics.

The Central Bank has deployed its reserves regularly to slow the peso's slide, but it has not been able to halt it since laying down tough capital controls in 2011.

The currency lost 24 percent against the dollar last year and another 18 percent since the beginning of 2014.

Last week, the Central Bank stepped aside for two days, letting the peso drop more than 14 percent before stabilizing it on Friday at what appears to be a target level of 8.0 to the dollar.

On Friday, the government announced it would ease the exchange controls, allowing people to buy up to $2,000 a month with their pesos in hopes of boosting confidence.

But since then, while the official rate has held, the black market rate has fallen further to 12.8 pesos to one dollar.

The devaluation has made exporters happy -- though many, especially in the crucial farm sector, have held back sales abroad in hopes of earning a better rate for the dollars they bring in.

But importers are displeased, facing much higher peso costs for what they bring into the country.

The public remains unsure. Since Monday, when the loosening of exchange controls for the general public took effect, there have been more than 75,000 exchange applications worth some $41.4 million.

Underpinning that is the trauma many Argentines still feel from the 2001 economic meltdown, when the peso crashed after it was de-pegged from the dollar, wiping out the savings of millions of middle class workers.

"Put my dollars in a bank account? Not on your life!" one listener told the popular Radio Mitre, a station that skews against the populist politics of Peronist President Cristina Kirchner.

"This is all a trap, they want to rob us," said the unidentified caller.

Since the early-2000s debacle, the Argentine economy has rebounded, helped by strong demand for its farm exports, most notably soybeans, which have brought in dollars.

Last year, the economy grew around five percent and it had a trade surplus of $9.0 billion, while the government's fiscal shortfall was relatively modest.

Argentina has shown "a good economic performance on the surface," said Joydeep Mukherji, a sovereign credit specialist at Standard & Poor's.

"The world is still buying almost anything Argentina can sell," said Mukherji, and the devaluation will boost competitiveness.

However, economists note, the devaluation will raise costs to the state, given its regime of heavy subsidies and price controls, which cover 200 household necessities sold in stores among other things.

After they raised prices following last week's devaluation, the government ordered retailers to reinstate prices in effect on January 21.

"The majority of prices in the country do not depend on the exchange rate with the dollar," the Economy Ministry argued.

It is allowing a maximum 7.5 percent increase for electronics and appliances, noting that many are made with important content.

"This is not sustainable in the long term," Straub said.

The devaluation could help drive inflation up to 30 percent this year, according to private sector economists, further encouraging Argentines to exchange their pesos for dollars.

But short-term help could come if the peso does stabilize: soybean growers can be expected to make their sales and bring in fresh dollars that will bolster Central Bank reserves.

"There will be relief" at that time, said Straub.