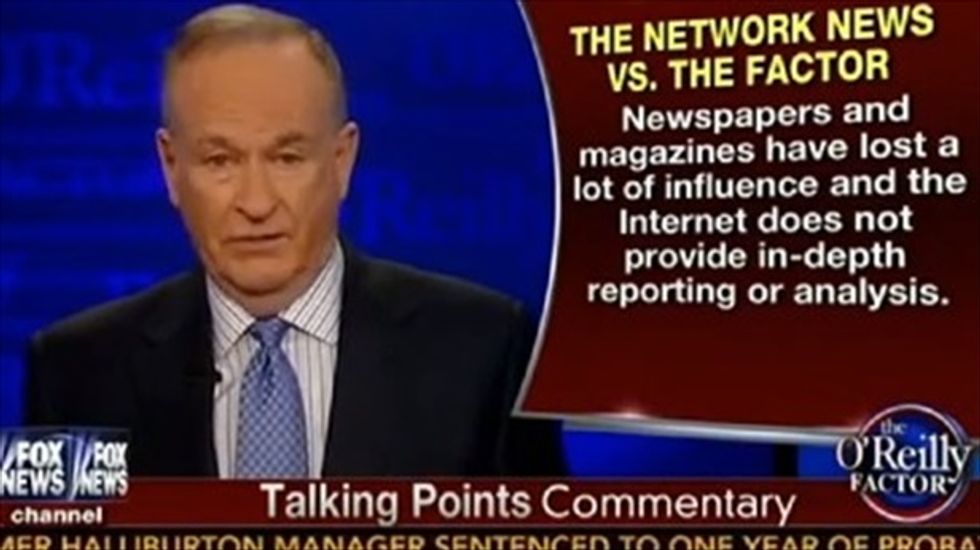 Fox News host Bill O'Reilly fired back at former NBC News anchor Tom Brokaw on Tuesday, arguing that Brokaw should be happy for the existence of cable shows like The O'Reilly Factor.

"Without cable news, Americans would not be getting vital education," O'Reilly said. "Look, I worked for CBS and ABC News. I know the gatekeepers there select stories based on a variety of factors. I also know that the network news broadcasts are pretty much the same on every channel. They don't provide much analysis or perspective, and all three networks lean left."

As proof, O'Reilly cited a report by the conservative site NewsBusters that networks spent twice as much time covering First Lady Michelle Obama's 50th birthday as they did the "security failings" that led to the fatal September 2012 attack on the U.S. facility in Benghazi, Libya.

Tuesday's remarks came in response to Brokaw's Jan. 17 interview with MediaBistro, in which he defended network newscasts' ratings performance in the face of O'Reilly's popularity.

"That audience is so much more substantial than people realize," Brokaw said of the cable News viewership. "When I talk to audiences, I say, 'How many of you think that Bill O'Reilly is the most popular guy in news?' and they all raise their hands. I say, 'Bill O'Reilly would finish dead last if he were on the evening news.'"

Watch O'Reilly defend cable news, as aired on Tuesday, below.