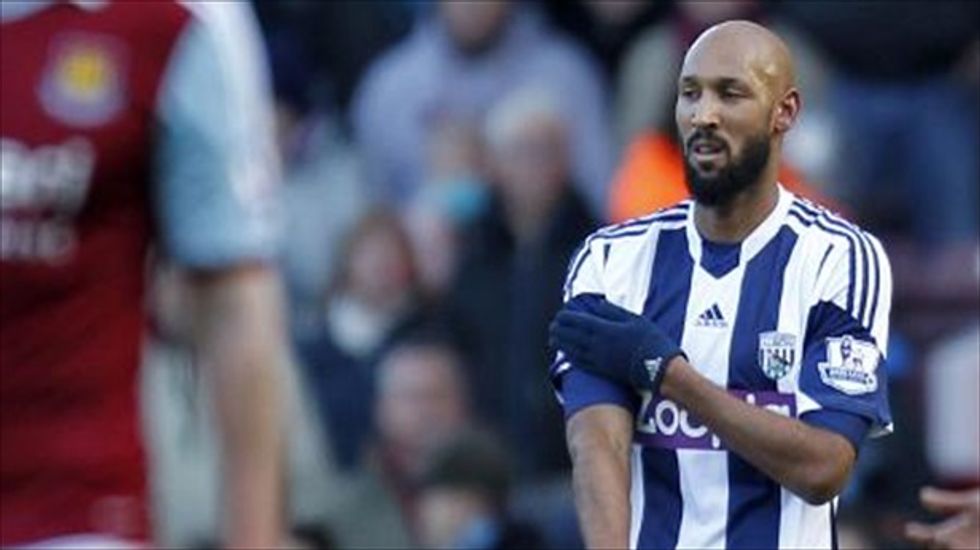 West Bromwich Albion's shirt sponsors are threatening to withdraw from a multi-million pound deal because of Nicolas Anelka's 'quenelle' goal celebration, according to a report in Britain's Marketing Week published Friday.

The magazine, citing sources, said Zoopla, a property portal co-owned by Jewish businessman Alex Chesterman, could pull out of the two-year contract as soon as next week should former France striker Anelka play against Everton on Monday because it does not wish to be associated with a gesture some people claim is anti-Semitic.

But Marketing Week said "one source close to the matter" had told them it was likely Anelka would face the Merseyside club in next week's Premier League match, with West Brom determined not to let sponsors dictate team selection.

The Baggies have reportedly made initial inquiries into securing a temporary sponsor for the remainder of the season should Zoopla, whose deal expires at the end of the current campaign, act on its threat, with the source telling Marketing Week the West Midlands club were "confident" of finding alternative long-term backers.

Anelka, 34, sparked a media storm last month when he celebrated the first of his two goals in West Brom's 3-3 Premier League draw at West Ham United by putting one arm across his chest and straightening the other.

The gesture, popularised by French comedian Dieudonne M'bala M'bala, has been described by critics in France as an anti-Semitic 'inverted Nazi salute', but Anelka has insisted that it was merely "a dedication" to the comic.

M'bala M'bala, more commonly known merely as Dieudonne, insists it is anti-establishment and not anti-Semitic.

Under new anti-discrimination rules introduced last May, Anelka faces a minimum five-match ban if the FA decides he is guilty of discrimination.

However, Anelka has since played for the Baggies, while both the club and England's governing Football Association continue their inquiries into the incident.

A club spokesman told Marketing Week: "West Bromwich Albion will be making no further comment until the Football Association has concluded its investigation, and the club its own internal enquiry, into the matter.”

The magazine added Zoopla did not respond to a request for comment in time for publication.

Last week the FA announced it had brought in an "appointed expert" to help with its investigation.

It also said no decision on whether Anelka would face disciplinary action would be announced until this coming Monday (January 20) at the earliest, a move which saw the FA criticised by anti-discrimination group Kick it Out for the time it had taken looking into the incident.