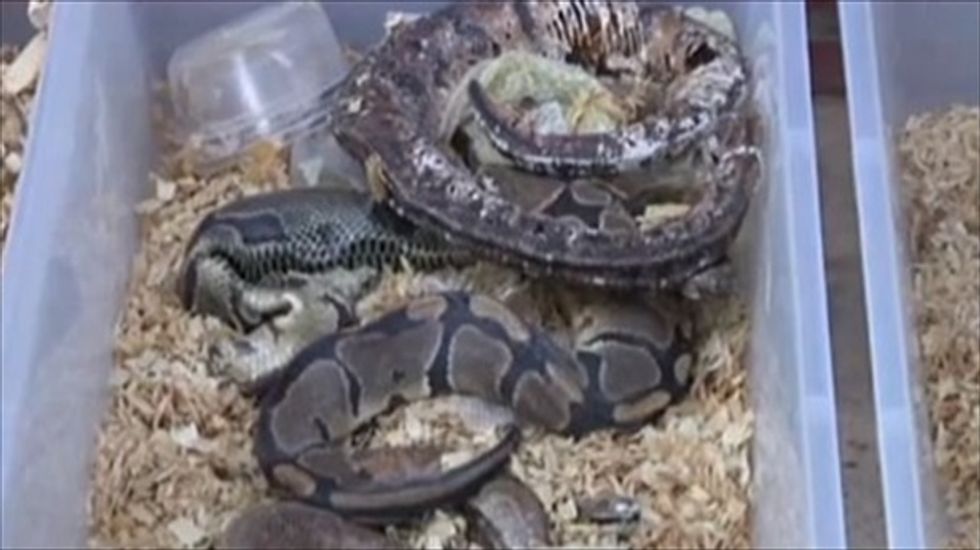 A Santa Ana, California man was arrested on Wednesday after police responding to odor complaints found he was keeping hundreds of malnourished snakes in his home, the Associated Press reported.

Local police found nearly 400 snakes in various states of health at 53-year-old schoolteacher William Buchman's residence, with four rooms of the house devoted to housing them in stacked plastic and metal bins. Buchman told authorities he ran a snake-breeding business on the side.

"House of horrors: That's the best way to describe it," said Sondra Berg, head of the department's Animal Services division. "I mean there's so many dead snakes ranging from dead for months to just dead. There's an infestation of rats and mice all over the house. There are rats and mice in plastic storage tubs that are actually cannibalizing each other."

Buchman was charged with neglect in the care of animals. Residents told police that his mother, with whom Buchman lived, had died within the past few years. Buchman's next-door neighbor, Forest Long Sr., told the AP Buchman's demeanor changed about a year ago, as he stopped being sociable and gained weight. Meanwhile, the odor emanating from his home grew more pungent.

"It got so bad as to where my wife would throw up," Long told the AP. "She'd get out of the car and run into the house."

Watch the AP's report on the arrest, aired on Wednesday, below.