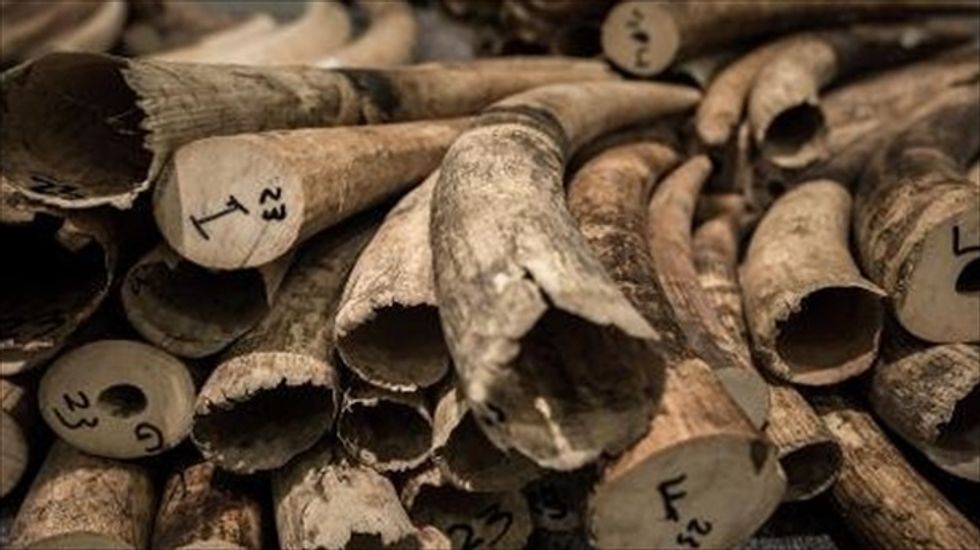 China crushed a pile of ivory reportedly weighing over six tons on Monday, in a landmark event aimed at shedding its image as a global hub for the illegal trade in African elephant tusks.

Clouds of dust emerged as masked workers fed tusks into crushing machines in what was described as the first ever public destruction of ivory in China.

The event in the southern city of Dongguan was "the country's latest effort to discourage illegal ivory trade, protect wildlife and raise public awareness," the official news agency Xinhua said.

Surging demand for ivory in Asia is behind an ever-mounting death toll of African elephants, conservationists say, as authorities have failed to rein in international smuggling networks.

Experts believe that most illegal ivory is headed to China -- where products made from the material have long been seen as status symbols -- with some estimating the country accounts for as much as 70 percent of global demand.

Chinese forestry and customs officials oversaw the destruction, which was shown live by state broadcaster CCTV. It reported that the ivory weighed 6.1 tons and had been seized over a period of years.

"With measures like this we can still save elephants from being driven towards extinction," said Iain Douglas-Hamilton, founder of London-based conservation group Save The Elephants.

Some of the crushed ivory powder would be disposed of and some displayed in a museum exhibit, while the rest would be "preserved", state-run China National Radio reported.

The powder can be used as an ingredient in traditional Chinese medicine.

China was in March named by the Convention on International Trade in Endangered Species (CITES) as one of eight nations failing to do enough to tackle the illegal trade in elephant ivory.

CITES banned international ivory trading in 1989, but the environmental group WWF estimates that around 22,000 elephants were hunted for their tusks in 2012, with a greater number projected for the following year. There could be as few as 470,000 left, it says.

Other countries have carried out similar exercises, with the US crushing six tons of ivory in November. The Philippines destroyed five tons of tusks in June, and Kenya set fire to a pile weighing the same amount in 2011.