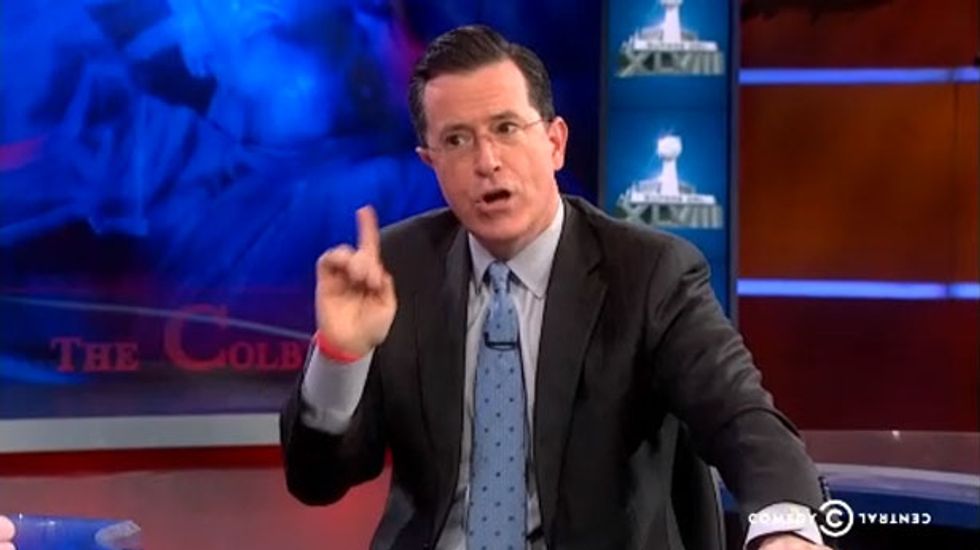 In his last episode before this Sunday's Super Bowl -- or "Superb Owl," as he is calling it -- Stephen Colbert addressed the many ways in which the legalization of marijuana intersects with this particular game.

He begins by showing a January 7 clip of National Football League Commissioner Roger Goodel arguing that if marijuana is legalized for medicinal purposes, he would investigate its usage for pain management because the NFL will "continually support the evolution of medicine."

Even though marijuana can be legally purchased for recreational use in both states represented in Sunday's game -- Washington and Colorado -- the NFL's collective bargaining agreement still lists marijuana on its list of banned substances. According to its official drug policy, "[t]he National Football League prohibits players from the illegal use, possession, or distribution of drugs, including but not limited to cocaine; marijuana; opiates and opioids; methylenedioxy methamphetamine (MDMA); and phencyclidine (PCP). The abuse of prescription drugs, over-the-counter drugs, and alcohol is also prohibited."

Although some have followed ProFootballTalk's lead in claiming that the policy only bans the use of "illegal drugs," it appears as the NFL will still be able to punish players for abusing marijuana, just as it does those who abuse alcohol.

For Colbert, however, that is "a clear endorsement of marijuana, because [his] statement was so rambling, he had to be high" to have made it.

He then frets that after "hitting the prescription pipe, players won't want to hit their opponents anymore. They'll just incapacitate each other with mind blowing science-facts. 'Dude, dude, did you know that all the gold in this championship ring was created in a supernova billions of years ago?'"

After a brief discussion about chronic traumatic encephalopathy (CTE) and League of Denial: The NFL's Concussion Crisis, Colbert returned to the topic of marijuana, inviting the mayors of "the Mile High City [Denver] and the Absolutely Baked City [Seattle]" on the show to make a friendly wager on behalf of their pot-smoking citizens.

The mayors, however, refused to take Colbert's bait -- Denver Mayor Michael Hancock bet a choice cut of beef against Seattle Mayor Ed Murray's salmon steak. As the two mayors went to shake hands to "seal the deal," Colbert had them "arrested" not only for supporting the legalization of marijuana, but for gambling in New York state, which he reminded them is still illegal.

Watch the entire episode of The Colbert Report below.