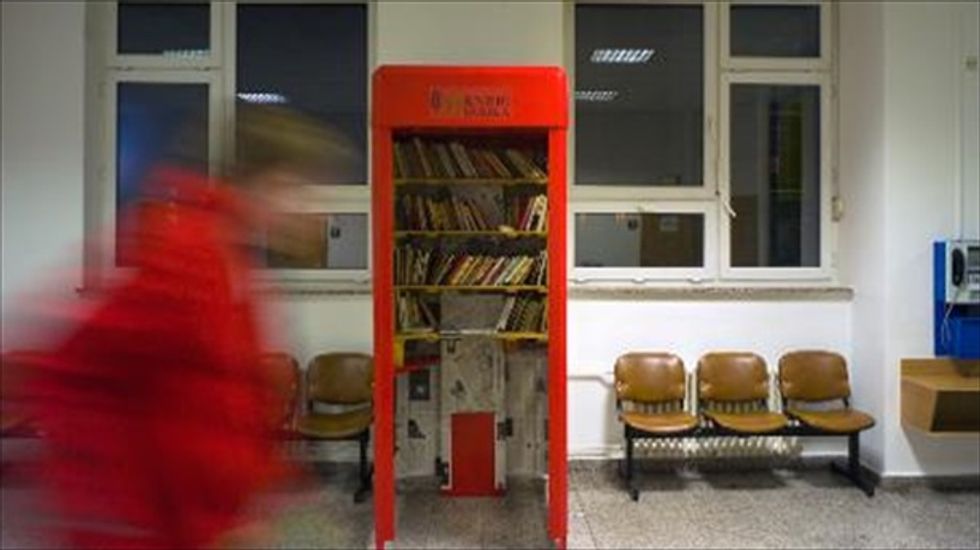 A man walks past a mini library made from a former phone booth in IKEM hospital on Jan. 9, 2014 in Prague [AFP]

Two Czechs have breathed new life into telephone booths made obsolete in the cell phone age, converting them into mini libraries with the first installed at a Prague hospital on Thursday.

On the shelves of the red booth, patients of the IKEM hospital will find a plethora of genres, including works by US crime writer John Grisham, Czech and Russian titles and biographer Andrew Morton's "Diana: Her True Story".

Library mastermind Monika Serbusova, 27, said she and a friend drew inspiration from a similar project in Britain.

They won backing from a local phone operator, then built the libraries with the help of colleagues and friends, painting the booths and installing wooden shelves.

"My cousin who studies at a technical school told us how to mount the booth, my grandma brought us a bagful of books from a scrap yard," Serbusova told AFP.

She said they intend to set up other libraries at a shopping centre and elsewhere. They currently have 700 books, but the selection will grow as people have promised to donate large collections.

"The plan is to install nine booths in Prague and then see how successful the project is," Lucie Jungmannova, a spokeswoman for phone operator Telefonica Czech Republic, told AFP.

She said the company runs over 13,000 booths across the country, down by half from 10 years ago as people increasingly use mobile phones.

"Patients can borrow a book and bring it back when they come for the next scan," she said.

But Alena Ulcova, selling flowers down the corridor, voiced concern over the city's high theft levels.

"I only hope people won't steal them. It would be nice if some of the books stayed on the shelves," she told AFP.