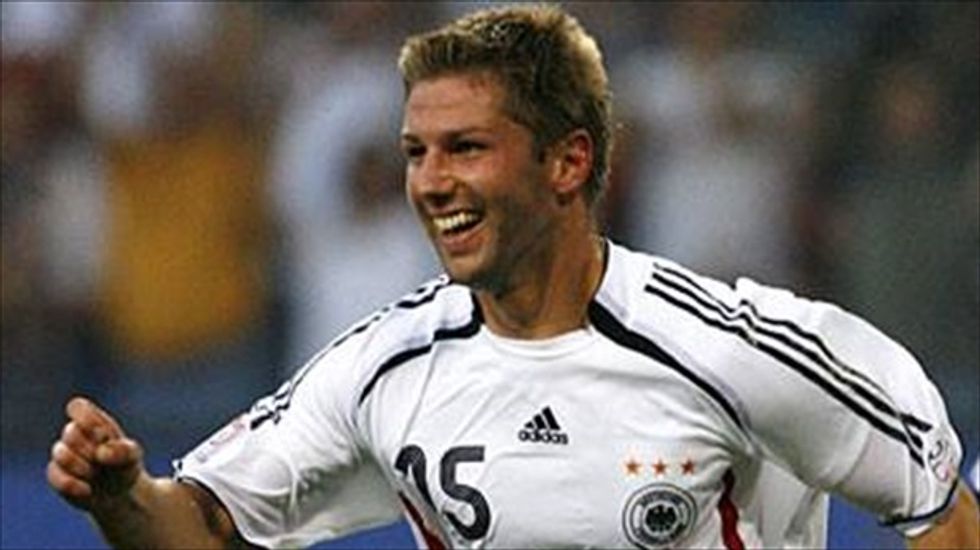 The football world has been quick to rally round Thomas Hitzlsperger, who has become the first German international to "come out" as a homosexual.

Hitzlsperger's announcement in the magazine Die Zeit has been heralded by players across Europe as an important step forward.

And on a day when Paris Saint Germain's Brazilian star Alex walked into a row over homophobia for comments he made in a TV documentary, the question of homosexuality in sport has suddenly become a major talking point.

Hitzlsperger's revelations were greeted by fellow-German international Lukas Podolski of Arsenal as "an important sign of our time".

In an interview to be published in Thursday's edition of Die Zeit, Hitzlsperger, 31, revealed: "I am declaring my homosexuality because I want the question of homosexuality in the world of professional sport to be out in the open."

But he admitted that reaching the agonising decision to come out had been "a long and difficult process".

Hitzlsperger, capped 52 times by Germany between 2004 and 2010, added: "It is only in recent years I have come to realise I preferred living with a man."

The midfielder, who hung up his boots at the end of last season, plied his trade in Germany, England and Italy with Aston Villa, Everton, Wolfsburg and Lazio among others before retiring last year.

Hitzlsperger said he had decided to "come out" because now was "a good time" for him and because he wanted to promote the discussion of homosexuality in professional sport.

"I've never been ashamed of the way I am," he added, although it had not always been easy to cope with some of the comments dished out.

"In England, Germany or Italy, homosexuality is not taken seriously as an issue, at least not in the dressing room."

Podolski tweeted: "Brave and right decision. Respect, Thomas Hitzlsperger. His outing is a important sign of our time."

In the world of football, the only previous big name to admit openly to homosexuality was former Norwich and Nottingham Forest striker Justin Fashanu in 1990. He committed suicide eight years later aged 37.

There were also messages of support for Hitzlsperger on Twitter from his former club Aston Villa as well as from ex-England captain Gary Lineker.

Villa said: "Everyone who knows Thomas from his time here at Villa has great respect for him, not only as the fine player he was but also as a man.

"His statement today is a straightforward statement and, along with our support as a club, we hope that everyone involved in the game extends to him their support as well."

Lineker tweeted: "Congratulations to Thomas Hitzlsperger on bravely being the first player to have played in the PL to 'come out'."

"As an #AVFC fan, I've always admired what Thomas Hitzlsperger did on the pitch – but I admire him even more today. A brave & important move," he wrote.

The QPR midfielder tweeted: "Thomas Hitzlsperger has shown a lot of courage today. Sad times when people have to wait till they retire from their chosen profession before they feel other people will judge them solely on who the human being is. Shame on all of us as a society."

Barton also added further tweets. "But it is understandable when brainwashed, religious zealots still believe in a fictional book written over 2000 yrs ago.

"To be religious extremist, you must first be extremely dumb in my opinion. Alex from PSG simply confirms my theory with his comments today."

That was a reference to comments by the PSG defender, a born-again Christian who sparked a row when he revealed his faith-based disapproval of homosexuality in a documentary on religion in football by French pay TV company Canal+.

Defending his stance, he said: "God wouldn't have created Adam and Eve but Adam and Yves."

"Are there gay footballers in Italy? We believe so. They should do the same as Hitzlsperger and come out publicly," said a statement by the organisation.

The statement added: "We live in a country that restricts civil rights by failing to recognise, for example, gay marriage, a country where dramatic events such as suicides, assaults and murders are a common occurrence.

"Top athletes coming out would relay a positive message, especially to young people and help to combat homophobia."