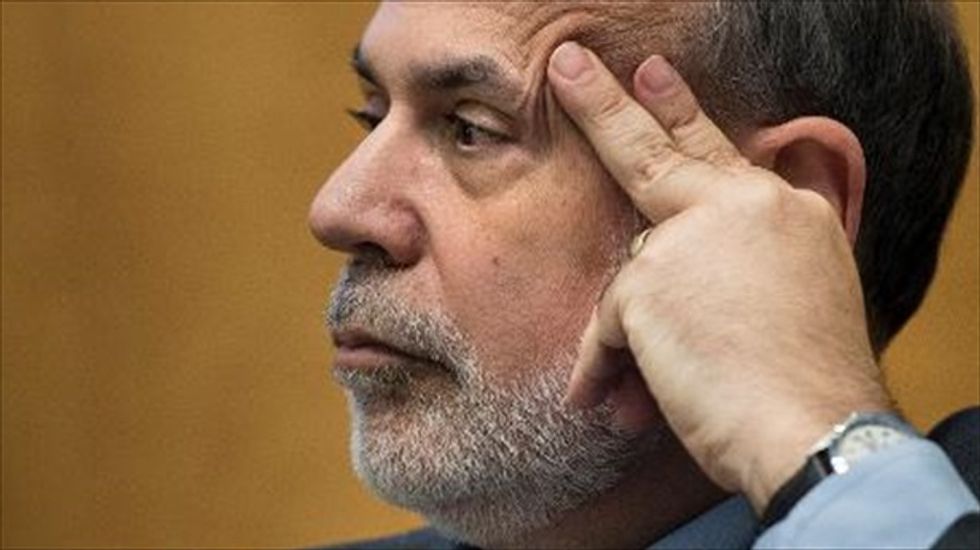 The Federal Reserve stayed the course on tapering its stimulus for the US economy Wednesday, reducing asset purchases by $10 billion for the second month in a row.

Amid emerging-market turmoil blamed in part on its stimulus reduction, the Fed, as expected, cut the monthly bond-buying program to $65 billion beginning February and left its benchmark interest rate near zero, citing "growing underlying strength in the broader economy."

Wrapping up the final meeting of the Federal Open Market Committee under departing Chairman Ben Bernanke, policy makers noted that despite some mixed economic indicators since their December meeting, overall the US economy was doing better.

Information indicates "that growth in economic activity picked up in recent quarters," the FOMC said in a statement.

That was a bit more upbeat than its December assessment of the economy "expanding at a moderate pace."

"The Committee sees the risks to the outlook for the economy and the labor market as having become more nearly balanced," it said.

There were few changes or surprises in the statement, said Ryan Sweet of Moody's Analytics.

"If there was any surprise, it was the Fed's decision not to cite international downside risks. The Fed was not going to be specific by mentioning emerging markets, but policymakers didn't acknowledge the recent strains in global financial markets," Sweet said.

The FOMC, appearing to acknowledge the shockingly weak December US jobs report, which many economists blamed on severe winter weather, said that "labor market indicators were mixed but on balance showed further improvement."

The FOMC pointed out that the unemployment rate fell "but remains elevated." The jobless fell to 6.7 percent in December largely due to people dropping out of the work force.

Household spending and business fixed investment has sped up in recent months, it noted, while the housing recovery was slowing.

Although fiscal policy remained a hindrance to growth, the impact of government budget cuts and tax increases was "diminishing," the Fed officials said.

Meanwhile expectations for inflation, running below the Fed's 2.0 percent target, "have remained stable."

The Fed, whose dual mandate is maximum employment and price stability, said that conditions were appropriate for a further "measured" tapering of stimulus.

"Taking into account the extent of federal fiscal retrenchment since the inception of its current asset purchase program, the Committee continues to see the improvement in economic activity and labor market conditions over that period as consistent with growing underlying strength in the broader economy," it said.

The policy makers reiterated that the pace of the asset purchases was not on a preset course and they would monitor the outlook for the jobs market and inflation, as well as the effectiveness and costs of the purchases, in deciding further action.

"If incoming information broadly supports the Committee's expectation of ongoing improvement in labor market conditions and inflation moving back toward its longer-run objective, the Committee will likely reduce the pace of asset purchases in further measured steps at future meetings."

The FOMC predicted that, with appropriate policy, "economic activity will expand at a moderate pace and the unemployment rate will gradually decline toward levels the Committee judges consistent with its dual mandate."

It was the last FOMC meeting chaired by Bernanke, who steps down Friday after an eight-year tenure at the helm of the US central bank marked by the 2008 financial crisis and the 2007-2009 recession, the worst downturn since the 1930s depression.

The Fed did not change its forward guidance on when it would consider raising its benchmark interest rate, which has been parked between zero and 0.25 percent since December 2008.

"It likely will be appropriate to maintain the current target range for the federal funds rate well past the time that the unemployment rate declines below 6.5 percent," it said.

The FOMC decision was approved unanimously for the first time since June 2011. It was endorsed by 10 voting committee members, including Janet Yellen, the current vice chair who succeeds Bernanke as the first woman to head the Fed on February 1.

A parliamentarian from Italy's ruling Brothers of Italy party has been targeted by law enforcement for allegedly publishing secret information in the case of an imprisoned anarchist on hunger strike, according to Italian media reports on Wednesday.

The public prosecutor's office in Rome is investigating statements by Giovanni Donzelli on suspicion that he divulged secret information during a parliamentary session on Tuesday about the anarchist Alfredo Cospito.