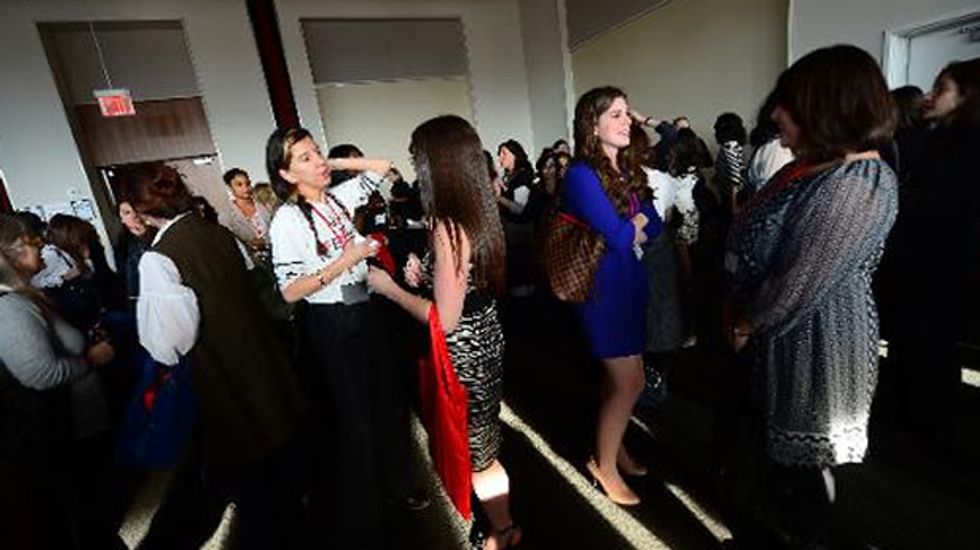 And to smash through that glass ceiling, they have found a new weapon: speed-dating style networking events. No men allowed.

Around 280 women of all ages and professions are given three minutes to get to know each other, swap business information and exchange cards before moving onto the next person.

It is the business equivalent of the matchmakers' speed-dating phenomenon that took off about a decade ago as a chance for the loveless to quickly meet multiple people in the hope of snaring a date.

The room gets increasingly riotous as the session wears on, bathed in the beautiful light of a New York winter afternoon.

Pairs of women group and regroup like members of a ballet company, exchanging business cards as they go.

Some nod and smile, others stifle a yawn, break into laughter or screw up their eyes in concentration before the emcee calls on them to move onto their immediate neighbor.

"Give me your card!"

Farther away, a woman named Milena, a bit older with a friendly manner, heads towards a young woman who has caught her eye.

"Are you looking for somebody to talk to?" she says, introducing herself as a former technology director about to embark on new projects with Jacqueline Courtney, the founder of website Nearly Newlywed, which allows brides to buy and sell back wedding dresses.

The rules are simple, says Nancy Hechinger, an ITP faculty member and co-founder of the event: three minutes to introduce yourself, your business and your passion in "hopefully semi-controlled chaos".

Rosemarie Gambetta -- a real estate agent who wants to turn her blog about dining out on a budget into an online restaurant guide, mobile app and business -- dreams of rising to the top.

Gambetta told AFP the event was a great exercise without the pressure of meeting a man.

For Denise Courter, who left Wall Street to found www.FiDiFamilies.com, a children's activities website in Manhattan, it was an opportunity to meet "inspirational women".

"So many times, I went to conferences that were men-centric, and this is focusing on women and that is very exciting because we are all able to help each other up the ladder," she said.

Despite high-profile success stories such as Barra at General Motors, only 15 percent of US companies and only 4.5 percent of Fortune 1000 companies are run by women.

Anne-Marie Slaughter, who stirred up a furor in 2012 with an essay in The Atlantic magazine asking if it was truly possible for working mothers "to have it all," opened the 2014 forum.

"It's exactly where we need to be -- encouraging women to start things, to make things on their own," she told AFP.

Slaughter gave up a high-flying job at the State Department in order to take up a role at Princeton University, which enabled her to spend more time caring for her two sons.

"Guys who are entrepreneurs know other entrepreneurs. And I know those networks are very important... because we're still a substantial minority," she said.

Sashka Rothchild, a former chef and founder of Standbuy, a cancer fundraising tool for families, has just had a child.

"I was way out of practice so this is a good way to get back into the saddle," she said.

"I did a little bit of A/B testing, what's the most concise way to get the message across... everybody is the room was a potential new client," she said.