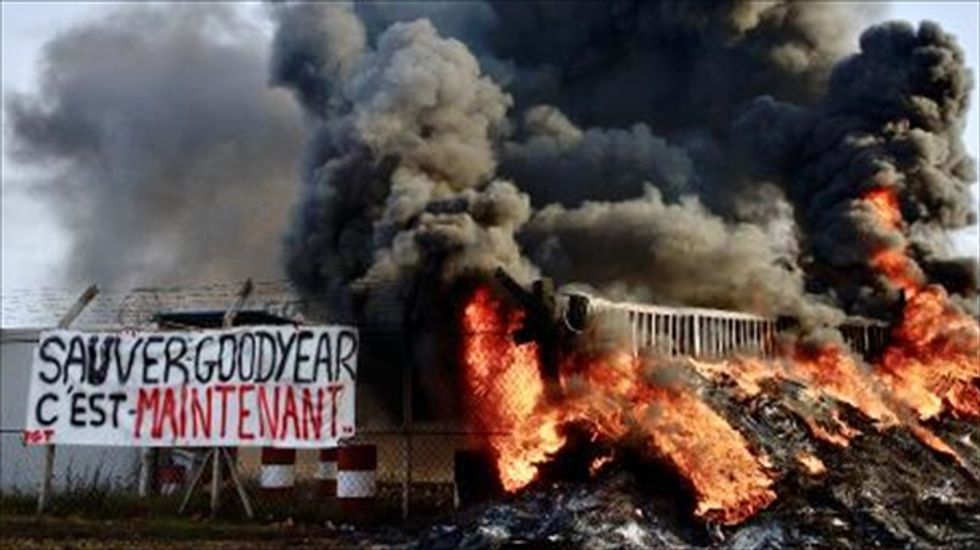 A picture taken on Dec. 5, 2013 shows burning tyres in front the US Goodyear factory in Amiens, northern France [AFP]

Workers at a Goodyear factory in northern France were holding captive two managers Monday as they upped their fight against the planned closure of the site and the potential loss of hundreds of jobs.

The director of production at the plant in Amiens and the head of human resources have both been locked in a meeting room since Monday morning in a "calm" atmosphere, Franck Jurek of the factory's works council told AFP.

Goodyear's management and unions have for years been locked in negotiations on how to handle the loss-making plant, but proposals put forward by the US firm have all been rejected by the majority labour union, the CGT.

One proposal that was abandoned in 2012 was a plan for voluntary redundancies, and the CGT hopes to bring an improved version of the plan back on the table.

"We want to come back to the negotiating table, which means a plan for voluntary redundancies and seeing if there is a buyer (for the plant)," Jurek said.

"If there is no buyer, (we want) a plan for voluntary redundancies for everyone with loads of money."

At the height of the financial crisis, the practice of so-called "bossnappings" to protest layoffs often took place in France, but these kinds of radical actions have tapered off.

Workers at the plant said all other avenues had failed after Goodyear concluded a consultation process with employee representatives in November, paving the way for a complete shutdown of the 1,173-strong factory.

Workers now fear that they will start being officially laid off in the coming weeks.

US firm Titan International has offered to take over part of the plant, but this would only preserve 333 jobs at the site for four years or more.

The two managers being held have been given water and still have their mobile phones, according to the CGT union.

Negotiations are "on stand-by. They will stay here and calmly spend the night with us," Jurek said.