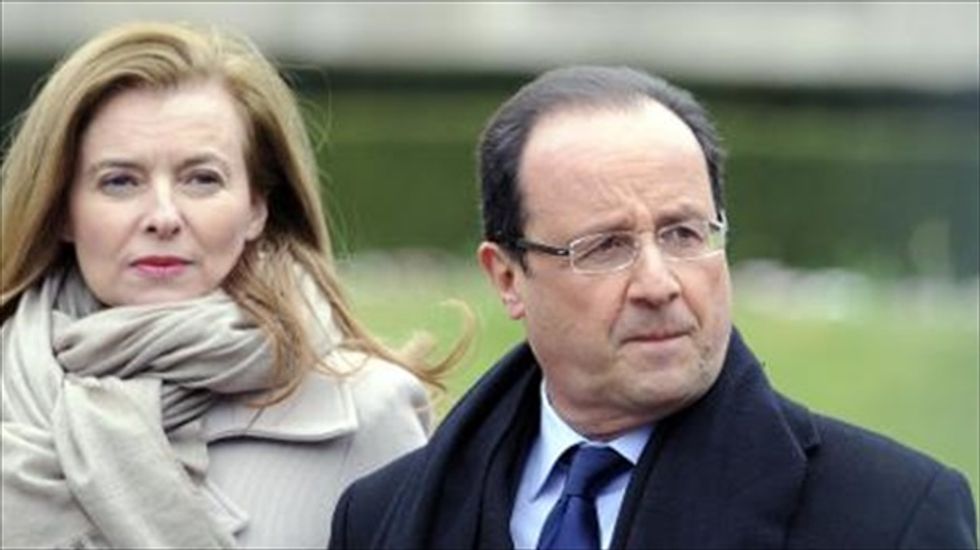 A photo taken on April 6, 2013 shows French President Francois Hollande and his partner Valerie Trierweiler leaving the Prefecture of Correze in Tulle [AFP]

In November, when he invited his French counterpart to a February 11 visit, US President Barack Obama said: "Michelle and I look forward to welcoming President Hollande and Valerie Trierweiler."

Since then, of course, Hollande has been accused of leading a romantic double life.

Hollande's official Elysee Palace biography still says that he "vit maritalement" -- lives in a marital way -- with 48-year-old journalist Trierweiler. Her profile dubs her his "companion."

But French celebrity weekly Closer, in a report that has not been denied, says Hollande has been enjoying a love affair with 41-year-old film actress Julie Gayet for the past two years.

Hollande says his private life is private, and has refused so far to comment on the reports -- but did tell journalists that he would clarify the situation before next month's White House visit.

So far, the White House has steered clear of commenting on the very public love triangle, saying that as far as it was concerned there were no changes to the visit's program.

Experts say there are no rules as such when it comes to significant others accompanying heads of state to Washington.

"There's no 'protocol' to deal with this kind of situation. It's all ad hoc and case by case," Donald Ensenat, who was United States Chief of Protocol from 2001 to 2007, told AFP.

"When a spouse accompanies the visiting dignitary, the spouse is included in the ceremony, dinner, and lunch but not the meeting with the president," she writes.

"The spouse of the US president usually hosts a tea or coffee for the visiting spouse after the arrival ceremony while the meeting with the president is taking place."

If Hollande does step onto the red carpet alone, he won't be the first to do so. China's Hu also arrived without his wife Liu Yongqing by his side.

And it also doesn't seem to matter that Hollande and Trierweiler -- if they do reconcile and travel to Washington together -- never said their vows.

Unmarried companion Trierweiler was treated the same as other first ladies when she accompanied Hollande to the White House on the sidelines of the G8 summit at Camp David in May 2012.

With all their pomp and circumstance, state visits are rare. Hollande's will be just the fourth since Obama took office.

The three other leaders preceding him were former Mexican president Felipe Calderon in 2010, followed by China's Hu Jintao and South Korea's Lee Myung-Bak in 2011.

The focal point of these highly formal trips, steeped in decorum, is the "state dinner" at the White House, attended by several hundred guests lucky enough to get an invite.

French, in her book, describes how a state visit includes a full-honors arrival ceremony on the South Lawn of the White House complete with a 21-gun salute.

Also part of the package is a state luncheon at the State Department and, typically, dignitaries are offered the option of staying at Blair House across from the White House.

French leaders, however, usually stay at the historic residence of their own ambassador, one of the finest addresses in Washington.

According to State Department archives, Hollande's state visit will be the first by a French president since 1996.