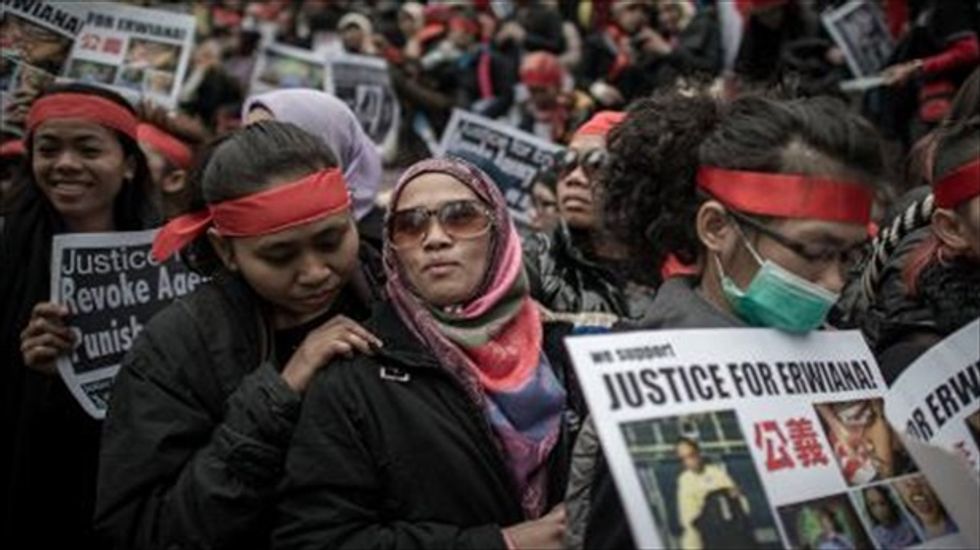 Demonstrators carry placards during a march in support of an Indonesian maid who was allegedly tortured by her employer in Hong Kong on Jan. 19, 2014 [AFP]

Police at Hong Kong airport Monday arrested a woman who allegedly tortured two Indonesian domestic helpers, a day after thousands staged a march to call for better migrant worker rights in the city.

The unnamed woman, a 44-year-old housewife alleged to have beaten domestic helper Erwiana Sulistyaningsih and another maid, was arrested at the city's Chek Lap Kok airport as she attempted to board a flight to Thailand.

"At about 4 o'clock today, Hong Kong police arrested a housewife of age 44. She is believed to be (involved) in connection with Erwiana's case and another abuse on an Indonesian domestic helper in Hong Kong," police officer Chan Wai-man told reporters some five hours after police detained the woman.

"She was trying to leave Hong Kong for Thailand," he added.

Sulistyaningsih, 22, was reportedly abused over a period of eight months while employed by the woman. Media reports said she was unable to walk due to her injuries when she flew home from the southern Chinese city this month.

Her ordeal sparked an outcry among domestic helpers and many locals, renewing concerns about the treatment of maids in the city.

The arrest came as police investigators on Monday travelled to Indonesia to interview the young maid.

They visited Sulistyaningsih in hospital in Sragen on the main island of Java in the evening and said they planned to take a formal statement later.

"All the information will be passed back to Hong Kong," police official Chung Chi-ming told reporters.

"She is also willing to go back to Hong Kong to assist in our investigation after her recovery," he said, adding that police took a "very serious" view of the case.

Over the weekend a second maid came forward saying she was allegedly brutalised by the same employers. Chan said Monday's arrest was based partly on evidence collected from that helper.

But the latest abuse case has strained relations between the southern Chinese city and Jakarta.

Reyna Usman, an Indonesian labour ministry official, said that Jakarta may review the placement of maids in Hong Kong if the city does not deal with the case seriously.

"In this particular case, the Indonesian (labour) minister wants a commitment from Hong Kong to take action against the agency and the employer," she said.

"The Indonesian minister will review cooperation on the placement of maids in Hong Kong if this matter is not dealt with seriously."

The financial hub's leader Leung Chun-ying insisted abuse of maids would be dealt with severely.

"Our laws do not allow anyone to impose violence on, or torture anyone's body and mind. Police have arrested the suspect in connection with the case," he said.

In September a Hong Kong couple were jailed for savagely beating their Indonesian domestic helper, including burning her with an iron and hitting her with a bicycle chain.

It said Indonesians were exploited by recruitment and placement agencies who seize their documents and charge them excessive fees, with false promises of high salaries and good working conditions.

The government stipulates a minimum wage and other conditions for foreign domestic helpers, but unscrupulous employers and agencies sometimes ignore this.