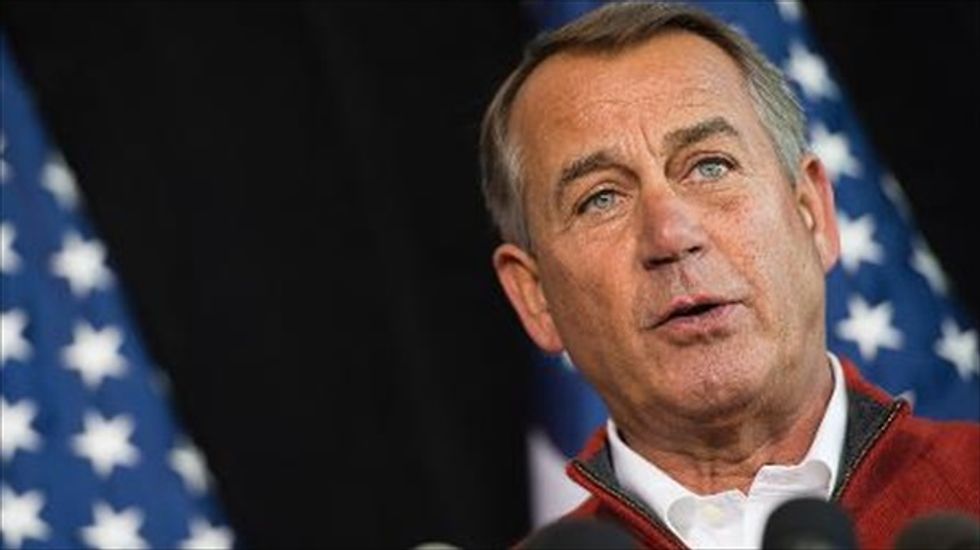 Republican lawmakers endorsed in principle the legalization of millions of undocumented immigrants on Thursday, but stopped short of backing a pathway to citizenship.

The majority party in the House of Representatives did, however, specify that it backs opportunities for young immigrants brought to the country illegally by their parents to become US citizens.

Most experts agree the Republicans' low level of support among voters of recent immigrant stock cost their candidates badly in recent elections, and the party is under pressure to reach out.

But many within the party ranks fear that passing legislation to help regularize the situation of millions of undocumented migrants could hurt them with voters from their white conservative base.

At a retreat for Republican representatives under the leadership of House Speaker John Boehner to set priorities ahead of November's mid-term elections, members drew up an outline approach.

"There will be no special path to citizenship for individuals who broke our nation's immigration laws – that would be unfair to those immigrants who have played by the rules and harmful to promoting the rule of law," said the draft, obtained by reporters.

The draft said such immigrants "could live legally and without fear in the US but only if they were willing to admit their culpability, pass rigorous background checks, pay significant fines and back taxes."

The one-page "Standards of Immigration Reform" is a only Republican messaging document in a mid-term election year.

But it may also represent the beginning of a thaw in a contentious issue of a deeply divided Congress.

But it still leaves House Republicans at odds with President Barack Obama and the US Senate.

The upper chamber last year passed a bipartisan immigration bill that included a 13-year pathway to citizenship for the more than 11 million people in the United States living in the shadows.

Boehner assured members behind closed doors that the House would not take up "or engage in negotiations with the Senate" on that measure, but stressed that step-by-step reform was important.

"The safety and security of our nation depends on our ability to secure our border, enforce our laws, improve channels for legal entry to the country, and identify who is here illegally," Boehner said

Some lawmakers are resisting calls from Boehner and senior party leaders to move on immigration, and the party must decide whether to risk an internal fight before November's congressional elections.

Boehner said that new strategizing on immigration as well as fiscal issues were signals that Republicans were recalibrating as the party of the "alternative," rather than just the opposition.

Paul Ryan, the Republican vice presidential candidate in 2012 who is seen as a bridge between House leadership and conservatives, underlined the reluctance to provide what many in his party have come to refer as "amnesty" for millions of immigrants.

"I do not think we should have a special path to citizenship for the undocumented immigrants," Ryan said. "That's why the House has long said we're going to do it our way."

Despite the lack of a clear citizenship path, some Democrats praised the action by Boehner to bring the issue to the fore.

"While these standards are certainly not everything we would agree with, they leave a real possibility that Democrats and Republicans, in both the House and Senate, can in some way come together and pass immigration reform that both sides can accept," said Chuck Schumer, one of the eight senators that crafted the Senate measure.

"It is a long, hard road but the door is open.”

"We are now talking about how people stay and how they come legally, not how we kick out 11 million people and build a big moat around the country," he said.