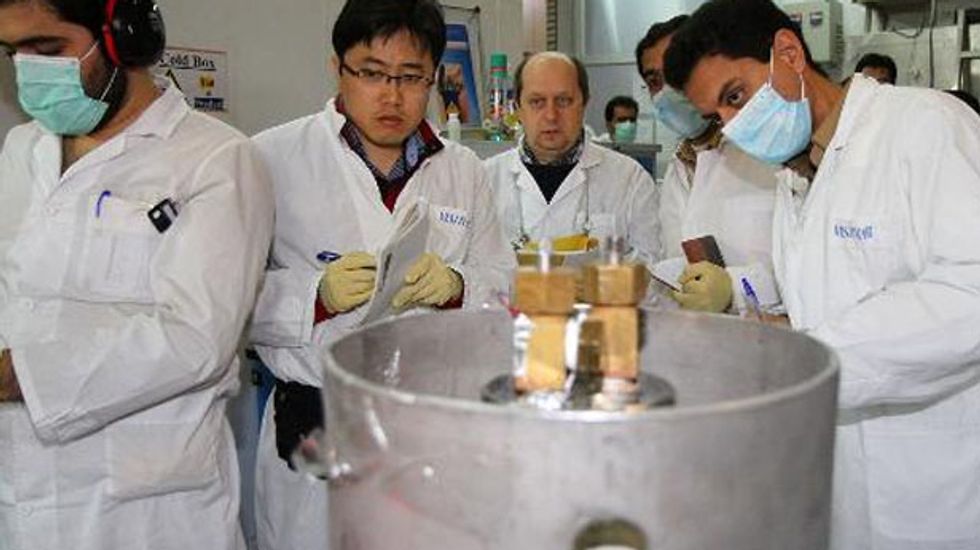 Iran on Monday halted production of 20 percent enriched uranium, marking the entry into force of an interim deal with world powers on its disputed nuclear programme.

Western powers kept to their part of the deal reached in November, with the European Union and the United States announcing they were easing crippling sanctions slapped on Iran.

The move came as the United Nations invited Iran to attend an international peace conference on ending the war in Tehran's ally Syria, despite strong objections from Arab and Western nations.

Implementation of the landmark nuclear deal also started the clock on negotiating a trickier long-term accord to end the nuclear standoff with and avert a possible war with Iran.

Under the deal Western powers will loosen the sanctions in a package worth $6-7 billion, including $4.2 billion in frozen overseas foreign exchange assets in eight instalments starting February 1.

The Atomic Energy Organisation's Mohammad Amiri told IRNA news agency Iran had kept to its part of the deal reached with the P5+1 powers -- the US, China, Russia, France, Britain and Germany.

"In line with the implementation of the Geneva joint plan of action, Iran suspended the production of 20 percent enriched uranium in the presence of UN nuclear watchdog inspectors at Natanz and Fordo sites," said Amiri.

Iran "has ceased enriching uranium above five percent" fissile purities at the Natanz and Fordo enrichment facilities, the IAEA said in a report passed to member states and seen by AFP.

It said Iran was also converting its stockpile of medium-enriched uranium, a particular concern to the international community since it could easily be purified to weapons-grade.

The IAEA said Iran "is not conducting any further advances to its activities" at Natanz, Fordo or the heavy-water reactor under construction at Arak, which could provide Iran with weapons-grade plutonium.

"It's all fine, all their requirements have been fulfilled," a diplomat told AFP.

EU foreign policy chief Catherine Ashton, who represents the P5+1, said she would meet representatives of the major powers Tuesday to push for further negotiations with Iran on a comprehensive solution.

"We should build on the momentum that we've got and start moving towards significant dialogue and negotiation in the next weeks... I would like to move swiftly," she said.

Ashton's comments came after the EU and the US announced steps to ease the sanctions.

"As part of the implementation of the Joint Plan of Action agreed by Iran and the (P5+1), which enters into force today, the Council today suspended certain EU restrictive measures against Iran for a period of six months," the EU said.

US Secretary of State John Kerry also approved a waiver to ease the sanctions, spokeswoman Jen Psaki said, as the White House hailed Iran's actions as "an important step forward".

Under the deal, Iran will not install or switch on new nuclear machines and will grant the IAEA daily visits to the Fordo and Natanz enrichment facilities.

But the core sanctions will still bite. Over the next half-year alone, Iran will miss out on $30 billion in oil revenues, the White House says.

Most of Tehran's $100 billion in foreign exchange holdings remains off-limits.

Mark Fitzpatrick, a former US State Department official now at the International Institute for Strategic Studies, said world powers will want Iran to slash the number of centrifuges to 3,000-4,000 from the current 19,000.

Iran must also mothball Fordo, change the Arak reactor so it cannot produce weapons-grade plutonium, and cut the stockpile of low-enriched uranium to less than a bomb's worth, he told AFP.

Coupled with tighter inspections, this would not remove entirely Iran's capability to make nuclear weapons -- it denies having this aim -- but it would make it considerably more difficult.

Agreeing the interim deal was hard enough, and neither side is under any illusions about the difficulty of securing a long-term agreement.

Even if a deal is reached, its terms may be too tough for hardliners in Iran and too lax for their US counterparts and Iran's arch-enemy Israel, the Middle East's sole if undeclared nuclear power.

Under the headline "Nuclear holocaust", Vatan-e Emrooz said Monday the Geneva accord would see most of Iran's nuclear activities come to a halt.

But Israeli Prime Minister Benjamin Netanyahu said the Geneva deal "does not prevent Iran from realising its intention to develop nuclear weapons".

Experts also warned against a push by US lawmakers to impose new sanctions, saying it could undermine further negotiations.

It would "send the message to Tehran that the United States is unable to hold up its end of the bargain," said Kelsey Davenport from the Arms Control Association.