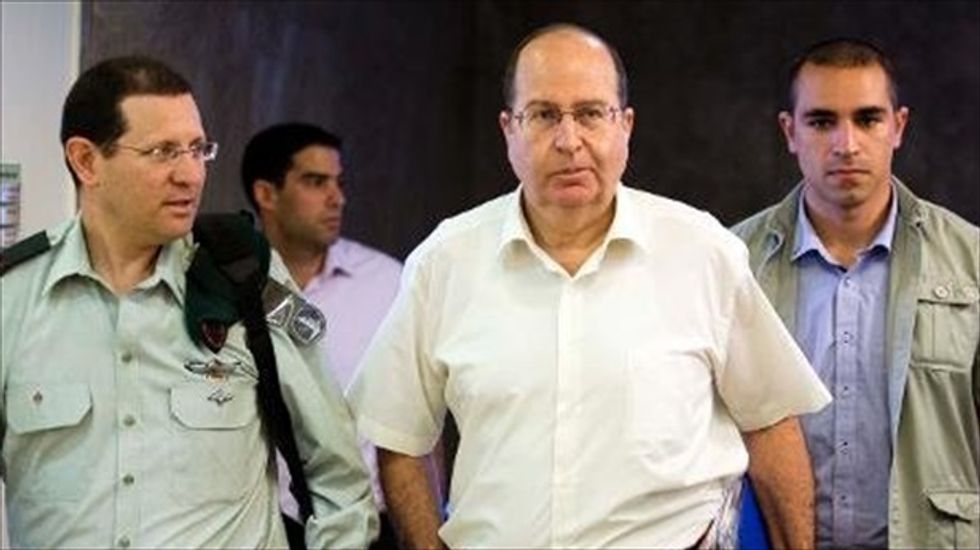 Israel's Minister of Defence Moshe Yaalon apologised Tuesday to US Secretary of State John Kerry after he accused the American of having an "obsession" with Middle East peace, sparking a furious diplomatic row between the two allies.

The White House had described Defence Minister Moshe Yaalon's initial comments as "offensive," in a mark of the degree of outrage in Washington at the latest public spat between the two countries, which follows a major row over Iran policy.

However, in a statement, a contrite Yaalon said: "Israel and the United States share a common goal to advance the peace talks between Israel and the Palestinians led by Secretary Kerry.

"We appreciate Secretary Kerry's many efforts towards that's end.

"The defence minister had no intention to cause any offence to the secretary, and he apologises if the secretary was offended by words attributed to the minister."

In private conversations with Israeli and American officials, revealed by the top-selling Israeli newspaper, Yediot Aharonot, Yaalon was quoted as expressing the hope that Kerry, who has made 10 trips to Israel since March, would end his peace push and focus his energies elsewhere.

"The American plan for security arrangements that was shown to us isn't worth the paper it was written on," Yaalon was quoted as saying, accusing Kerry of being naive.

"Secretary of State John Kerry -- who arrived here determined, and who operates from an incomprehensible obsession and a sense of messianism -- can't teach me anything about the conflict with the Palestinians," Yaalon reportedly said.

"The only thing that might save us is if John Kerry wins the Nobel Prize and leaves us be."

His comments provoked fury in Washington causing fresh tension between the governments of President Barack Obama and of Netanyahu.

US President Barack Obama's spokesman Jay Carney said Yaalon's remarks "if accurate, are offensive and inappropriate, especially in the light of everything Secretary Kerry is doing to support Israel's security needs".

"To question Secretary Kerry's motives and distort his proposals is not something we would expect from the defence minister of a close ally."

A State Department official called on Netanyahu to publicly disavow his minister's comments.

"We expect the prime minister to put this right by expressing publicly his disagreement with the statements against Secretary Kerry," the official told AFP.

Speaking earlier in the Israeli parliament, Netanyahu had chided Yaalon for the personal nature of his criticism of Kerry, although he did not take issue with his comments about US policy.

"Even when we have disagreements with the United States, it is about the matter at hand and not about the person," Netanyahu said.

Kerry coaxed Israelis and Palestinians back into direct negotiations last summer and has since shuttled tirelessly between the two leaderships in a bid to keep the talks alive.

His proposals include a security plan for the border between a future Palestinian state and neighbouring Jordan, involving high-tech equipment to enable Israel to reduce or end its troop presence on the ground, Israeli media say.

Yaalon's remarks came on the back of a US-Israeli spat over a landmark deal Washington and other world powers reached with Iran in November on its controversial nuclear programme.

Israel publicly opposed the plan, which will see limited relief for Tehran from Western sanctions in exchange for rolling back parts of its civil nuclear programme, describing it as a "disaster" and a "gift" to its biggest foe.

Israel has also been at loggerheads with its US ally over its drive to expand its settlements in the occupied West Bank, including annexed Arab east Jerusalem, even while the peace talks with the Palestinians that Kerry helped relaunch are under way.

A senior US official on Tuesday reiterated Washington's opposition to settlement building, which it has called "illegitimate."

Over the last few decades in America, partisanship has become a type of personal identity. A political party is more than an organization or the letter next to a candidate's name on a ballot. This is about much more than "political polarization" or "hyper-partisanship" or the other sterile technical language which experts routinely use in academia, the news media, and the larger political class. In today's America, party identification reflects fundamental debates and divides over what it means to be a citizen, a member of a political community and a human being.

Two concepts are particularly useful for understanding this broken politics and the larger democracy crisis: