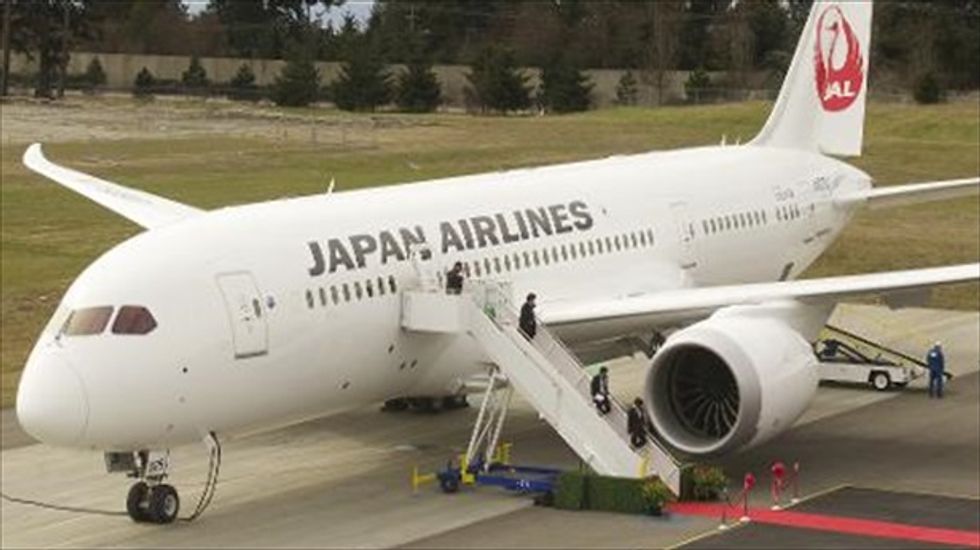 Delivery of first 787 to Japan Airlines March 26, 2012 at the Paine Field in Everett, Washington [AFP]

Japan Airlines has grounded one of its Dreamliner jets after it found "white smoke" apparently coming from a battery system during a check-up for departure, the carrier said.

A maintenance staffer saw a warning for a battery system problem as well as white smoke outside the window when working in the cockpit for the plane's departure for Bangkok on Tuesday, JAL said.

The grounded plane was replaced with another Boeing 787, which departed as scheduled Tuesday with 169 passengers and crew members.

On Wednesday JAL said it would continue flying Dreamliners.

"We are making sure of the safety of every plane before its departure. We will continue regular flights (with Dreamliners)," company spokesman Norihisa Hanyu said.

In the problem-hit plane, JAL found one of the eight lithium-ion cells in the battery system had leaked liquid into its container.

Another JAL spokesman said: "The temperature of the cell was high. We believe it caused 'white smoke', which could be smoke or vapour."

JAL and chief rival All Nippon Airways (ANA), the single biggest operator of 787s, were among airlines hit by the worldwide grounding of Boeing's lightweight plane following problems with the lithium-ion batteries, including a fire.

Boeing admitted in April last year that despite months of testing it did not know the root cause of the problems, but rolled out modifications it said would ensure the issue did not recur.

The measures comprised redesigning the battery and charger system and adding a steel box to prevent burning.

Since then, Dreamliners have experienced a series of minor glitches, including a fault with an air pressure sensor and the brake system.

In October, unflushable toilets caused JAL pilots to turn their plane around just after it left Moscow bound for Tokyo.