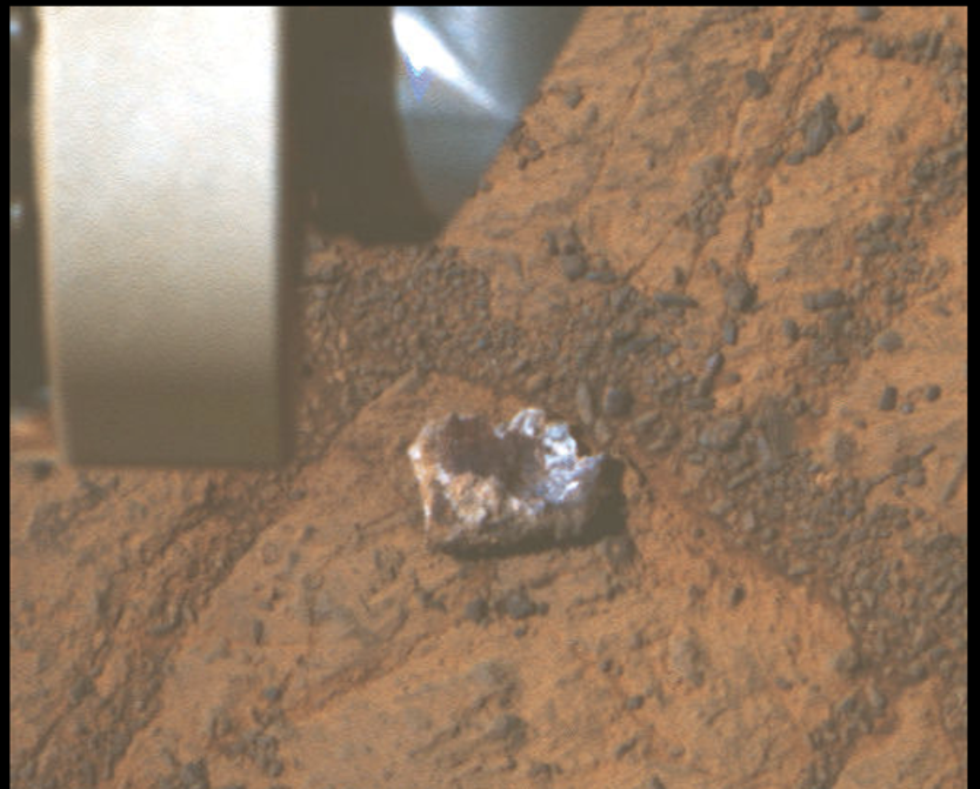 A self-proclaimed scientist, "astrobiologist" and historian has sued the National Aeronautics and Space Agency (NASA) for what he alleges is a failure to investigate possible extraterrestrial life on Mars. News.com.au reported that Dr. Rhawn Joseph filed suit in the U.S. District Court of the Northern District of California on Monday alleging that a white rock spotted my Mars rover Opportunity may be a life form and should be investigated as such.

In the suit, Joseph urged the agency and its director Charles Boulden to investigate the rock and "perform a public, scientific, and statutory duty which is to closely photograph and thoroughly scientifically examine and investigate a putative biological organism."

Earlier this month, NASA reported that an oddly-shaped white rock -- some people have described it as looking like a "jelly donut" -- appeared in photos taken by Opportunity over the course of two weeks. In one set of photos, the ground near the rover is rust-colored with a scattering of like-colored pebbles. Then, two weeks later, the white rock has appeared.

NASA has named the rock "Pinncale Island" and theorized that it is a meteorite that struck nearby or a stone dislodged by Opportunity's treads. The agency released a statement that read, "Much of the rock is bright-toned, nearly white. A portion is deep red in color. Pinnacle Island may have been flipped upside-down when a wheel dislodged it, providing an unusual circumstance for examining the underside of a Martian rock."

One scientist said, "It's like nothing we've ever seen before."

Joseph has written several books and directed a "docu-dramatization," including volumes on the 9/11 attacks, brain chemistry, human medical experiments on Chinese civilians by the Japanese during World War Two and other topics including "biological UFOs."

The lawsuit against NASA alleges that the white rock isn't a rock at all, but "a mushroom-like fungus, a composite organism consisting of colonies of lichen and cyanobacteria, and which on Earth is known as Apothecium"

"The evidence is consistent with biological activity," Joseph wrote, "and suggests that life on Mars may have been discovered."

News.com.au reported that Joseph is "aligned with the online Journal of Cosmology," but one scientist asked to review submission for the journal wrote a scathing account of being asked to examine one of Joseph's white papers. In it, Joseph claimed to make the case for extraterrestrial origins of life on Earth.

Scientist David Brin said that he was writing the blog post "to offer you a glimpse of the seamy and immature side of scientific paper publishing" to readers.

Brin said that when the Journal of Cosmology contacted him, he had "high hopes" of it being a respectable publication.

"Alas, my hopes ebbed as I read the paper: 'Life on Earth Came From Other Planets,' by Rhawn Joseph, Ph.D.," said Brin. The paper was a shambles, he said, and he "found much to fault in it."

He returned the annotated white paper to the journal only to have the editor "go ballistic" on him, he said, accusing him "in emotion-drenched terms, of defaming and insulting Dr. Joseph."

"I blinked in appalled wonder," at the editor's response, Brin said.

Editorial histrionics aside, however, Brin allowed that "(t)he topic of Dr. Joseph's paper is an interesting one. Indeed, despite some naïveté and glaring omissions, it also contains some thought provoking and entertaining passages," just not very many scientific ones.

Joseph charged in his lawsuit that NASA is intentionally hiding evidence that the white rock isn't a rock at all.

NASA maintains that the white rock is just a rock, albeit one with what appear to be some unusual characteristics.