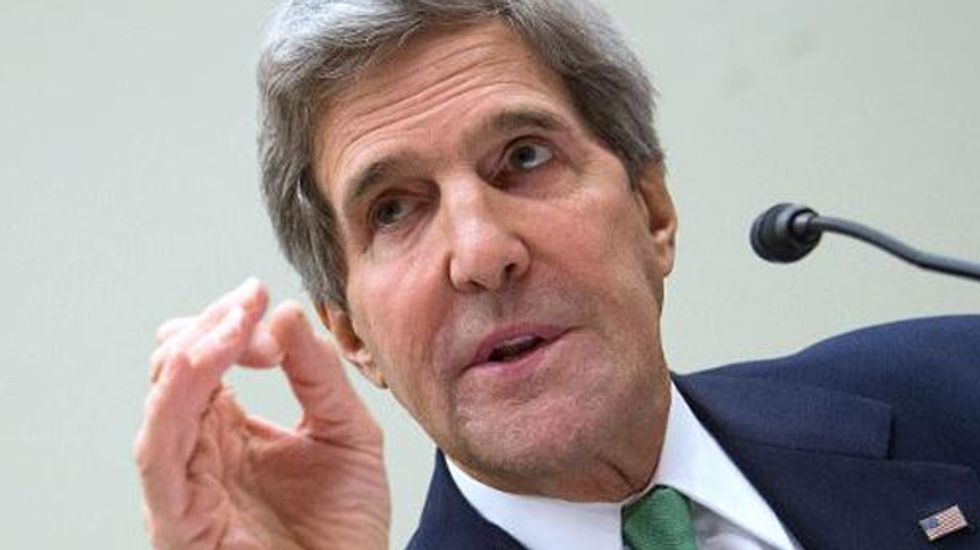 Iran could show it wants to play a constructive role in upcoming Syrian peace talks by urging the Damascus regime to halt bombardments of civilians and allow aid access, US officials said Monday.

"There are also steps that Iran could take to show the international community that they are serious about being a positive player," a senior State Department official told reporters travelling with Secretary of State John Kerry.

"Those include calling for an end to the bombardment by the Syrian regime of their own people, it includes calling for encouraging humanitarian access."

Washington has long opposed calls by Russia and others to allow Tehran to participate in the talks due to be held in Switzerland on January 22.

It accuses the Islamic republic, the main ally of Damascus, of providing weapons, manpower and cash, as well as arming Hezbollah militants fighting with Syrian President Bashar al-Assad against the armed opposition.

More than 130,000 people have been killed in three years of brutal fighting, with the opposition still splintered and increasingly taken over by hardline Islamic groups.

The aim of the talks is to bring together for the first time since the civil war erupted in March 2011 both the regime of Syrian President Bashar al-Assad and the opposition to work towards a transitional government and halt the violence.

US officials again stressed to reporters on the plane, just as it landed from Jerusalem on a refuelling stop in Brussels, that the United Nations and Secretary General Ban Ki-moon were hosting the talks and responsible for issuing invitations.

And they stressed again that for Iran to be considered for a full seat at the negotiating table it would need to accept a June 2012 accord which sets out that there should be a transitional government in Syria.

But for the first time on Sunday, Kerry had hinted Iranian officials may be able to play some kind of role on the sidelines of the proposed talks.

"Could they contribute from the sidelines? Are there ways, conceivably, to weigh in? Can their mission that is already in Geneva be there in order to help the process? It may be that there are ways that can happen," he said.

Speaking Monday, a senior State Department official said the issue of Iran's participation would be discussed at a meeting next week of the group known as the London 11, which has been backing the Syrian opposition.

"There's not a decision that has been made at this point," a senior State Department official told reporters on Kerry's plane, saying Iran's participation would be "less likely than likely".

The US didn't "expect Iran to speak out publicly ... although we more than welcome them doing so," another official said.

"But if they work with the Syrian regime, who they support, to get the Syrian regime to help set a better climate for the negotiations by stopping the aerial bombardments in Aleppo and improving humanitarian access" that would be looked on favourably, another official said.

"It would more favourably pre-dispose people to Iran's participation were they to take steps like that," he said, adding that regardless of the upcoming peace conference the United States would like to see Iran use its "high degree of influence" with Damascus to help stop the bloodshed.

However the officials stressed that there were no guarantees that any action taken by Iran would allow them to participate in any role at the talks, which will open in Montreux on January 22 and then move to Geneva.

A number of countries were however expected to take what they described as a "consultative" role in the talks, to be initially attended by foreign ministers before they hand over to their political teams.

"Not every country is going to be in the room at every moment as these negotiations are going on, but there may be situations in which countries may be called upon to express their views."

But he stressed that the details of the talks was still "all being worked out in real time."