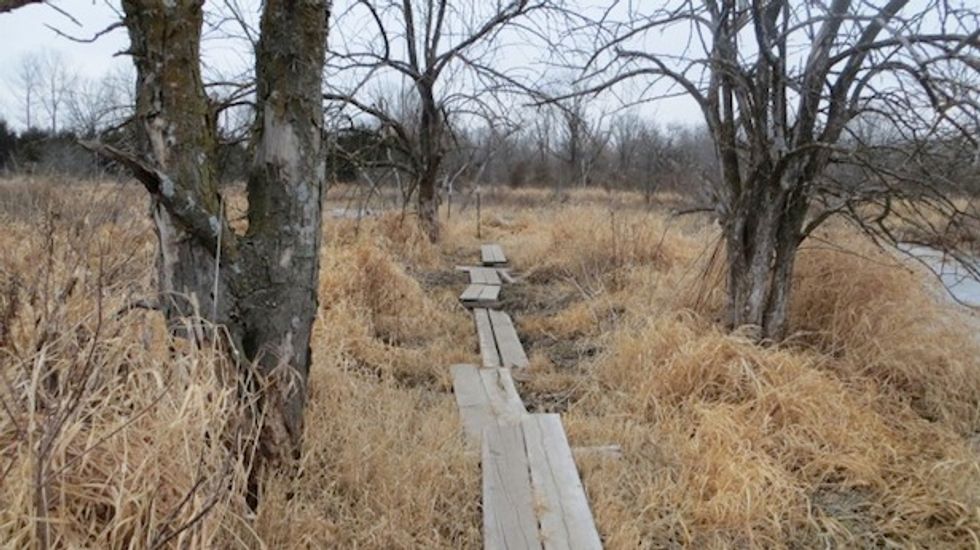 Soon, a four-lane freeway will slice across wetlands next to Haskell Indian Nations University in northeast Kansas. Over 100 years ago, this land sheltered Native children fleeing a government school. It still cradles remains today.

When Pemina Yellow Bird, 58, moved to Lawrence, Kansas in 1994, she was invited to a ceremony at the sweat lodge hidden in the marshes near Haskell Indian Nations University (HINU).

During that first visit, Yellow Bird learned of the Kansas Department of Transportation’s plan to build a freeway through the wetlands, most of which is owned by another

“I was thankful to have a beautiful place to pray. Who would I be if I didn’t fight to protect it?” said Yellow Bird.

Advocates managed to stall the SLT for 25 years, but construction began in 2012.

Officials call the SLT an “economic corridor” as it will connect two existing highways. Adjacent land has been cleared for development.

A tiny, forlorn graveyard at the edge of the wetlands contains 116 headstones, each marked with a name, a tribe and an age -- in many cases, younger than 15.

Now a university, Haskell Institute was opened in 1884 by the federal Bureau of Indian

Affairs as a Christian military boarding school, part of a nationwide network created to

“civilize” Native Americans. Officials forbade children from speaking their native languages and practicing their culture. An 1880s exposé in a local paper revealed that depression, disease and abuse were rampant at the school located by “useless” swampland.

Yet the wetlands gave students a refuge. They held traditional ceremonies and met with family in secret. Resisting students forged some of the first inter-tribal bonds, groundwork for modern-day HINU. Runaways also fled through the wetlands.

Oral histories also say that many children, who died at the school or while running away, are buried in unmarked swamp graves. Inconsistencies in Haskell’s death records make this entirely possible.

Indians and environmentalists banded together in the legal fight to protect the wetlands.

They won a lawsuit in the late 1990s because the Kansas Department of Transportation (KDOT) had failed to obtain a federal permit for the SLT.

KDOT, slowed but undeterred, obtained the construction permit in 2008.

Plaintiffs sued again, this time accusing KDOT of failing to do a proper environmental impact statement. They also said KDOT had artificially inflated the cost of an alternate

route, which would skirt the wetlands. But this time, KDOT won the battle: the court ruled that the state had properly obtained all necessary permits.The appeals court held up the ruling.

For lawyer David Prager, who represented the Prairie Band Pottawatomie tribe, the

“KDOT had already spent over $1 million on the project,” he said. “The judges were

pressured by business interests and conservatives.”

Both lawsuits centred on the SLT’s environmental impact; Indian issues were noted only peripherally.

“It’s the difference between what’s important to people and what helps you win the case,” Prager explained.

Spirituality is hard to quantify. In 2002, the National Register of Historic Places said there wasn’t sufficient information to designate the wetlands a Traditional Cultural Property. An official record of unmarked graves may have helped the wetlands’ case, but many Natives are uneasy with the idea of a grave hunt.

“If a grave is found, the contents are dug up and taken away for study,” said Yellow Bird, specifying that this violates Natives’ beliefs about the treatment of ancestral burials.

“We need a way to memorialize the children who were at Haskell. The wetlands have become that, whether they are buried there or not,” said Mike Caron, a wetlands campaigner.

HINU staff and students have led the movement to save the wetlands, though the school has avoided official involvement. Dan Wildcat, professor of American Indian studies, is one longtime advocate.

When he talks about the wetlands, Wildcat’s eyes close.

Even before Haskell was built, Indian tribes hunted and gathered on the land. Current

students conduct research in the ecosystem buzzing a few steps from campus.

Wildcat has a grant to signpost medicinal plants, which students still harvest. The

community also uses the land for spiritual practice. The wetlands hold sweat lodges and a medicine wheel, a structure based on the four cardinal directions.

The freeway won’t touch the medicine wheel, cemetery or sweat lodges, but the sound,

lights and 15-foot concrete barrier will certainly have an impact. The road will cover ruins from Haskell Institute, erasing testament to the long history of Native suffering.

With few resources and little hope of being chosen for review amongst thousands of other applicants, wetlands activists did not file an appeal to the Supreme Court.

Yet even with the case closed and construction starting, Wildcat isn’t sure that the wetlands’ luck has run out. State funding may pose a problem for the project, billed at $190 million.

KDOT has begun work on artificially-constructed wetlands, part of a mitigation project that also includes a parking lot. Caron, resigned, is working to get “toad tunnels” built so animals can cross the freeway.

Yellow Bird feels that she and the other activists did their best.

“We used everything our ancestors gave us to fight,” she said.

Since they lost, lawyer Prager has retired. He often walks in the wetlands.

“There is a spiritual magic there,” he said.

On a recent visit, he and a friend heard an unmistakable clap of thunder.

The sky was blue and cloudless.