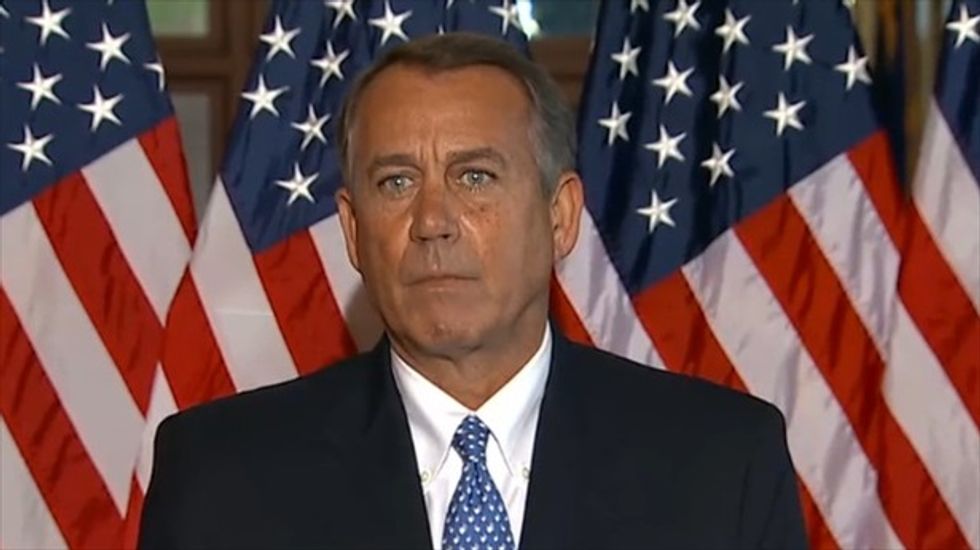 John Boehner can't exert any control over his party.

Last night's State of the Union was pretty good. I realize a lot of people felt it was "meh", but I liked the fact that it wasn't dilly-dallying and President Obama laid forth a bunch of goals for himself that are achievable. And, of course, a bunch of goals for Congress that are unachievable because House Republicans are a bunch of layabouts whose sole interests are banning abortion and hoping that the one millionth time they repeal the ACA will be the one that sticks. That's an important thing to highlight. The public needs to understand that Republicans are lazy and worthless and that they're actually kind of proud of it.

I think the President's points all felt very obvious and mainstream for two major reasons: 1) The country has shifted left on economic issues in recent years, largely due to the recession. That's no big surprise, and a similar thing happened during the Great Depression. Nothing like watching the middle class wither away and economic insecurity become the mainstream for people to stop spitting on poor people, as they are in very real danger of becoming poor people themselves. It's a real life version of John Rawls' veil of ignorance. 2) The Republicans have become so extremist that even the most ordinary, mainstream ideas---such as the idea that a person who works full-time should not live in poverty---have become strongly identified as partisan ideas. As Brian Beutler pointed out in Salon:

Intentionally or otherwise, Obama’s speech was a reminder to Democrats that the storm clouds of Obamacare implementation have obscured their view of the popular platform the party ran on so confidently in 2012. That there are a series of issues that animate Democratic constituencies on the docket, both ahead of 2014 and beyond, and all of them are political and substantive winners for the party.

All the Republicans can do, really, is try to conceal what they really stand for. There was a lot of that going on last night, with them disingenuously applauding things like pay equity and the right to vote, even though Republicans have been pretty active in fighting both, especially the latter. Not that there's anything new about the Republican strategy to win elections  by simply lying about where you stand, of course, but it's becoming increasingly untenable for them as their base, hyped up by their internet-enabled ability to express themselves, are increasingly demanding more public right wing posturing to go along with the right wing policy.

You saw that problem on full display with the many and varied "responses" that were given. The official one, by Rep. Cathy McMorris Rodgers, was mostly fluff with the only serious aspect being her signaling that Republicans fully intend to continue with their single-minded obsession with rolling back reproductive rights. But even that was in coded language, bland platitudes about how much she loves life that are scripted so as to imply that Republicans have nothing more serious in mind than congratulating mothers for being awesome, instead of the real plan to force childbirth on the unwilling. The fact that other Republicans felt that wasn't enough was telling. They can't help but undermine themselves. Pandering to the right means giving up votes, but at a certain point, they clearly don't care anymore.