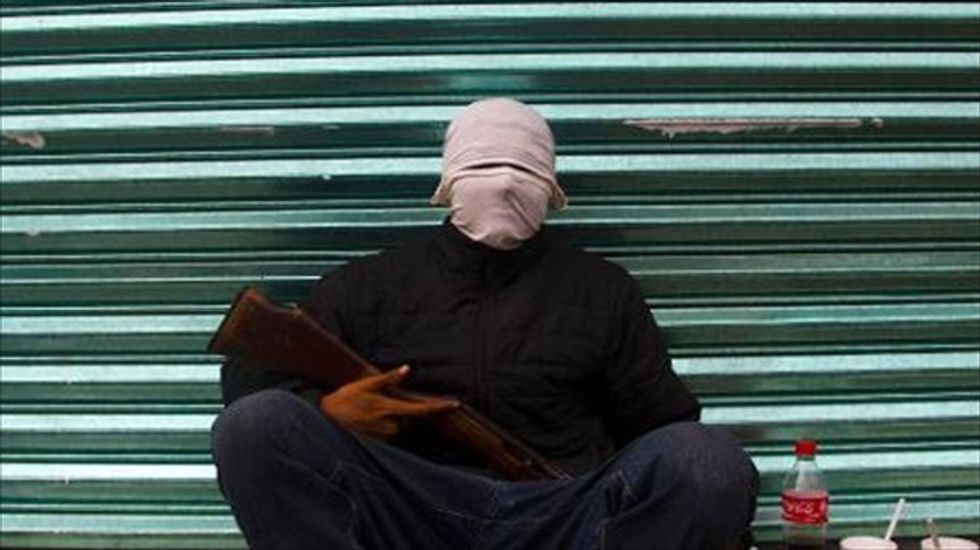 Armed member of the citizens' self-protection police sits on the street in Uspero community, Michoacan State, Mexico, on Jan. 16, 2013 [AFP]

ariachi musician Efrain has traded his violin for a rifle. He wants to fight a drug cartel that killed two of his nephews.

His plight is like that of many in the Mexican state of Michoacan, where vigilante groups were formed last year to take on the cartel called the Knights Templar.

Efrain, 58, said his nephews were 19 and 20 years old. The family paid the ransom demanded by the drug lords, but the hostages were killed anyway.

In the past Efrain had already been forced to undertake the unpleasant task of playing with his mariachi band at parties thrown at the ranches of the drug traffickers.

He guards a ranch in a region called Tierra Caliente, the epicenter of violence between the vigilantes and the cartel, which engages in kidnapping, extorsion and other crimes besides drug trafficking.

Sick of the years of abuse, the vigilantes rose up with the support of many farming communities in Tierra Caliente.

But they have raised eyebrows because they seem suspiciously well-funded.

They drive expensive trucks and use AK-47 assault rifles. The suspicion is that they are financed by some other cartel that wants to take Knights Templar territory.

"We really do not know where their interests lie. They must be some that are linked to drug traffickers, but it is clear that they got fed up with making payoffs to the Knights Templar," said a woman in the city of Apatzingan who refused to give her name.

"All we want is to not have to pay them so they will leave us alone," she added.

People in Tierra Caliente have spent months in a state of alert.

They are trapped in the crossfire between the Knights Templar and the vigilantes, who have taken control in some 20 towns to try to expel the drug cartel.

Added to the mix this week were thousands of federal police and army troops sent in by President Enrique Peña Nieto to try to pacify the region.

Like many other parts of Mexico it has been plagued by drug-related violence for years, but it is now the main security issue facing the president as he wages war on the cartels.

The conflict has left more than 77,000 people dead in drug-related violence since 2006.

On Wednesday the president named a close aide, Alfredo Castillo, as commissioner for public safety in Michoacan, seen by worried US officials as a main source of synthetic drugs like crystal meth.

Towns on their knees

The first thing the Mexican government did was relieve municipal police in towns in Tierra Caliente. For years they have been suspected of working for the Knights Templar. In order to be a police officer in this region you had be "first a hitman and Knight Templar" said Gregorio López, a priest in the town of Apatzingan, considered the main stronghold of the cartel.

The city has come to a virtual standstill since unknown assailants set fire to town hall and several businesses last week.

The city "is on its knees", says a restaurant employee who refused to give his name. He said the Knights are responsible for the shutdown of the city and called it their way of trying to maintain influence in their traditional turf.

Despite the deployment of 2,000 federal police in Apatzingan, violence has persisted. On Thursday a man was shot and wounded outside the federal prosecutor's office, a regional official told AFP.

Fear in the countryside

Lopez, the priest, defends the vigilantes' cause.

He said the power of the cartel is such that it scared away the city's streetside shoe shiners and replaced them with their own people to serve the federal police "and laugh in their faces."

His message to the Knights Templar is that "it is time to repent."

In the rural communities of Tierra Caliente where the vigilante groups took up arms, people say the Knights have kidnapped young women and taken them to hideouts in the mountains and have also forcibly recruited young men into their ranks.

Now, farmers are afraid to go out and harvest. They fear the Knights are out there to confront the armed uprising by the vigilantes, which has created a violent atmosphere in the region.

"A few days ago they told us to get ready stock up on food, but we did not know that this was going to happen", says a 60 year old homemaker, pointing to bullet holes in her house.