Jet lag isn't just miserable -- it causes 'profound disruption' to more than 1,000 of your genes 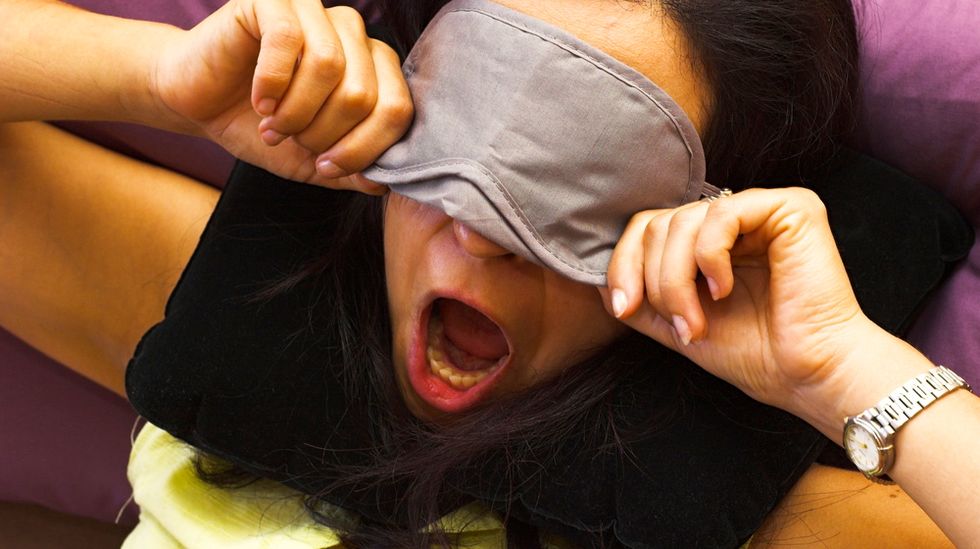 Researchers have found evidence that jet lag causes "profound disruption" to more than a 1,000 genes, including many that are normally drawn upon to maintain, repair and protect the body.

The findings might help to explain why people with jet lag feel so miserable, with ailments ranging from nausea and anxiety to stomach complaints and memory problems, scientists said.

Tests found that hundreds of genes whose activity should rise and fall on a daily basis lost their rhythm when people had jet lag, while other genes developed abnormal cycles of their own.

Scientists spotted the effects in 22 men and women aged 22 to 29 who took part in the study at Surrey University. The volunteers stayed at a centre where the lighting was controlled to transform a normal 24-hour day into a 28-hour day.

Three days into the study the participants' sleep-wake cycle had been shifted forwards by 12 hours, meaning they were completely out of synch with their body's 24-hour biological clock. The effect was designed to simulate severe jet lag or working a night shift.

"None of these people are sleep deprived. They get enough sleep. Our aim was to tease apart the effects of the body clock and the effects of sleep," said Simon Archer, a reader in chronobiology and first author of the study.

The researchers took blood samples from each participant before the study began and again on the third day. Before the study, the activity of 1,396 genes rose and fell in line with a healthy circadian rhythm. Afterwards, only 40 or so kept their rhythms. Another 180 genes, which normally had constant levels of expression, began to rise and fall instead.

Writing in the journal, Proceedings of the National Academy of Sciences, the scientists state that "the negative health outcomes" linked to jet lag, and also nightshift work, may have their roots in the "profound disruption" of the usual rhythms of gene activity.

"If you desynchronise sleep from your body clock with jet lag or shift work, so many processes are affected, in terms of the timing of when things happen," said Archer. "It explains why you feel so bad when you're jetlagged or doing shift work.

"Sleeping at the wrong time is bad for you. We know it has a massive effect on the temporal organisation of gene expression and that must link up with negative outcomes."

One of the most striking findings from the study is that jet lag and nightshift work had a similar effect on gene activity to ageing. As people age, the daily rise and fall of gene expression becomes less pronounced. "With mistimed sleep we lose the strength of the signal, as it were, and we know that is also lost in ageing," said Archer.

The findings will have an impact far beyond research into jet lag and shift work. John Hogenesch, an expert on the effects of circadian clocks on physiology at the University of Pennsylvania, said such disruption to gene activity could affect how well people's drugs work.

Many common drugs work properly only if they are taken at the right time. For example, Mevacor, a cholesterol-cutting statin, works best at night because levels of the enzyme it targets are highest then. The same goes for the use of low-dose aspirin to lower blood pressure.

The effects are likely to hit patients in intensive care the most. "Patients in long-term intensive care are generally in an unnatural environment where resetting cues such as natural sunlight, exercise and food aren't normal. Because of this, their body times can go out of phase with the environment. Certain drugs work best when given at the right time, but for these patients it isn't as simple as looking at the clock," he said.

Stuart Peirson, who studies circadian rhythms at Oxford University, said the reported changes in gene activity could affect people's wellbeing. "Rhythmic physiology is an important aspect of normal healthy physiology, so such impairments may have health consequences," he said. "I think the authors are being quite honest in that they do not know whether the effects they observe have direct clinical consequences, but this certainly warrants further investigation. The fact that it occurs after just three days of disrupted sleep is quite surprising."