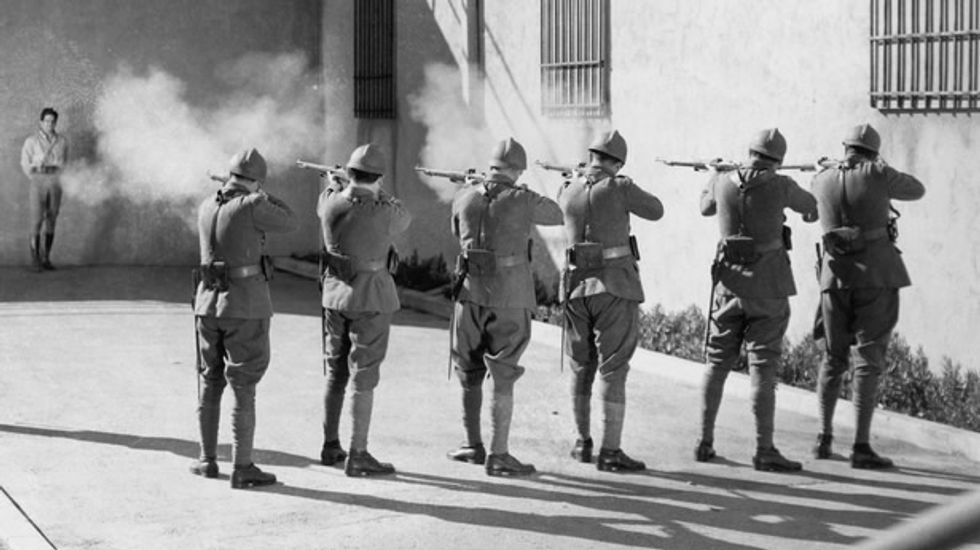 Missouri State Representative Rick Brattin (R) is proposing legislation that would allow death row inmates to choose a firing squad as their means of execution.

States have been struggling to acquire the drugs required to perform lethal injections in a manner that is neither "cruel" nor "unusual."

Missouri has executed two inmates in recent months using pentobarbital, but the drug comes from a compounding pharmacy in Oklahoma that isn't licensed to do business in Missouri. Also, because the injectable form of pentobarbital is licensed to Lundbeck, the manufacturing of it by a compounding pharmacy violates the Food and Drug Administration's regulations against producing "copycat" versions of FDA-approved drugs.

One solution is to return to firing squads, which are a constitutionally approved means of execution. They are also, as an advocate of a similar bill in Wyoming notes, "one of the cheapest."

Wyoming State Senator Bruce Burns (R) told The Associated Press that he "chose firing squad as opposed to any other form of execution is because frankly it's one of the cheapest for the state. The expense of building a gas chamber I think would be prohibitive when you consider how many people would be executed by it, and even the cost of gallows."

The Missouri bill would authorize the director of the Department of Corrections to "to provide a suitable and efficient room or place, enclosed from public view, within the walls of a correctional facility of the department of corrections." It would also empower him to "select a five-person firing squad consisting of licensed peace officers."