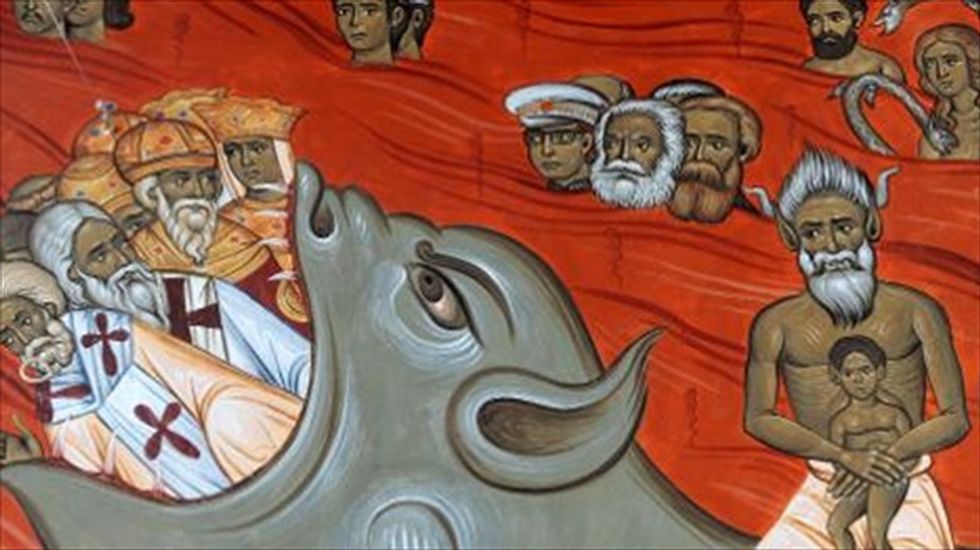 A fresco with the portraits of late German philosophers Karl Marx (C) and Friedrich Engels (C-R), alongside Yugoslav communist leader Tito (C-L) is pictured in the 'Church of Resurrection' in Podgorica on Jan. 31, 2014 [AFP]

Apparently swimming in a sea of fire as a diabolical beast nearby swallows people whole, Tito is depicted in his military uniform alongside the heads of Marx and Engels -- whose works were required reading in the former Communist state of Yugoslavia.

The work appears in the newly built "Church of Resurrection" in Podgorica, capital of the tiny Adriatic republic of Montenegro, which has already attracted criticism for its lavish design and frescoes depicting local politicians.

While the fresco painter, who remains anonymous, "is allowed the freedom to see things as he wishes," Dragan voiced criticism of the setting of the trio in Hell.

"He cannot judge, in the name of the Church, who belongs in Hell or Heaven," he said.

Visitors were divided whether the fresco should remain.

"The Church should not interfere in the secular world and determine who deserves a place in Hell or Heaven," said 43-year old lawyer Rade Stankovic.

But 23-year old Milos, who declined to give his last name, judged that "Communism has caused so much evil."

"Many people were killed in the name of the ideology promoted by Marx, Engels and their followers," he said.

The church is not the only one with figures from 20th century history adorning its walls.

In Ostrog, one of the most famous monasteries in Montenegro, Hitler, Lenin and Tito appear together with Judas, who betrayed Jesus.

The claims have never been confirmed, while Mladic and Karadzic are currently on trial for genocide and war crimes before the UN tribunal in The Hague.