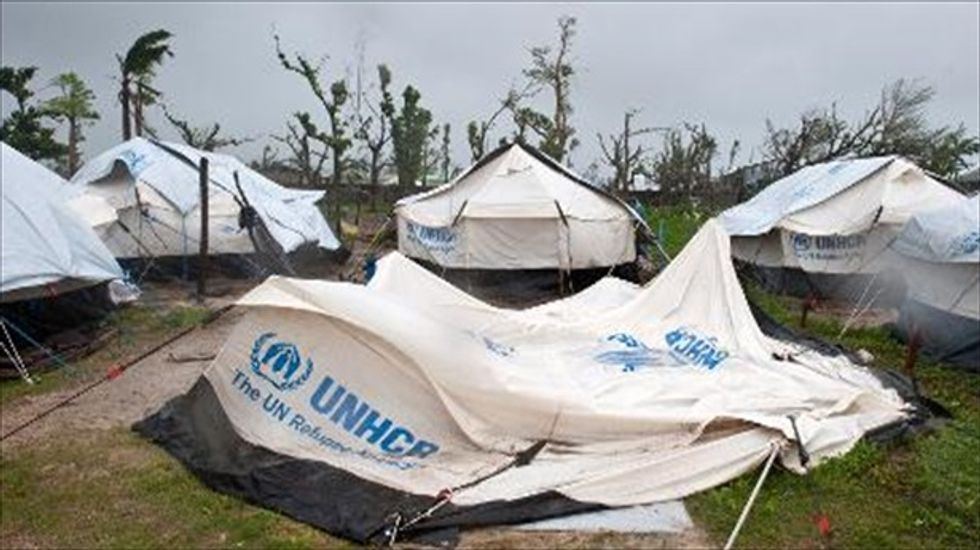 A handout photo taken on January 18, 2014 and released by the OXFAM on Jan. 20 shows a damaged tent in Guiuan after damage from torrential rain and gale force winds [AFP]

The United Nations warned Monday more needed to be done to help millions displaced by the Philippines' deadliest typhoon, after a new cyclone tore down flimsy shelters.

More than 1,000 survivors of Super Typhoon Haiyan fled to the safety of government buildings in the town of Guiuan on the weekend as a fresh tropical storm flattened tents and ripped the roofing off other temporary shelters, officials said.

"The (new) cyclone is a reminder that more needs to be done.... for vulnerable displaced people," Russell Geekie, spokesman for the UN Office for the Coordination of Humanitarian Affairs told AFP.

Guiuan, on Samar island about 600 kilometres (372 miles) southeast of Manila, was the first area to be devastated when Haiyan hit on November 8.

It left nearly 8,000 people dead or missing and more than four million others homeless across the central islands, officials said.

The government is building temporary housing while looking for safe relocation sites for survivors of coastal communities ravaged by giant waves unleashed by Haiyan, warning the rebuilding would take years.

A UN aid appeal for nearly $800 million last month for Haiyan relief is about 42 percent funded, but the component for shelters was "only a fifth funded", Geekie said.

British aid group Oxfam also warned the temporary shelters given to Haiyan survivors were no match for the extreme weather in the Philippines, which is hit by an average of 20 storms and typhoons each year, along with frequent earthquakes.

"In one of the most disaster-prone countries in the world, it's critical we quickly provide safe homes... for those continuing to live in dangerous and difficult locations," its country director Justin Morgan said in a statement.

The government said the new storm had killed at least 40 people on the southern region of Mindanao, outside of the areas devastated by Haiyan.

But in Guiuan, which lies close to Mindanao, up to 30 tents collapsed, while standing water also soaked through the floors of others, said Murad Ullah, the local operations chief for the UN High Commissioner for Refugees.

President Benigno Aquino's spokesman Herminio Coloma confirmed the damage to the tents and a government-built bunkhouse.

"They (occupants) will be accorded every assistance that is needed," he told reporters.